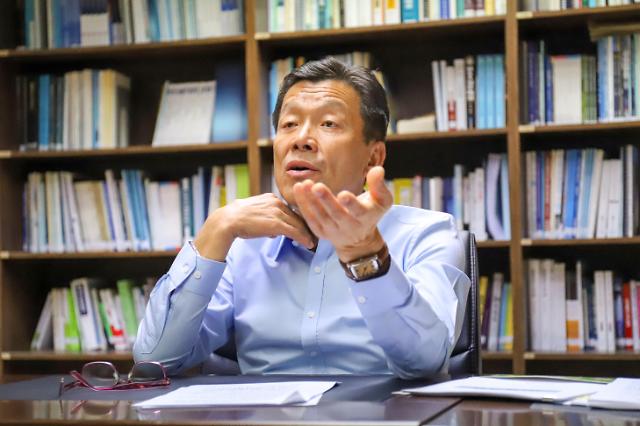 Under a sweeping government-led program to restructure the country's ailing shipping industry, Hanjin Shipping which used to be South Korea's top container carrier terminated its 40-year-long business in February last year. Some of its assets were sold to Hyundai Merchant Marine controlled by creditors.

SM Lines became a major container carrier in South Korea by acquiring a U.S.-Asia route from Hanjin Shipping. The company has launched a series of joint routes with domestic and foreign partners to strengthen its competitiveness.

"We should consider the merger between Hyundai Merchant Marine and SM Lines," Kim said in an interview with Aju Business Daily. "We will be able to compete with cartelized European shippers if we can quickly increase our loading capacity, reduce various costs, and streamline our routes through mergers."

Kim has lamented Hanjin's liquidation as a big policy mistake made by the government of ex-president Park Geun-hye because it weakened the overall competitiveness of South Korean shippers and helped foreign rivals increase their clout.

South Korea should have combined Hanjin Shipping and Hyundai Merchant to create a big company with a capacity of one million TEU (twenty-foot equivalent unit) container ships that would have reduced port processing costs by about 20 percent, he said.

"You must learn a lesson from this failure," Kim said, pointing to a new government campaign to increase South Korea's total container fleet capacity to 1.13 million TEU by 2022. The capacity of Hyundai Merchant and SM Lines is estimated at 400,000 TEU and 170,000 TEU, respectively.

"Currently, we have no ability to take cargo from European shipping companies. We should enhance our competitiveness by increasing the number of ships and fleet through mergers."

South Korean shippers are required to place orders for 200 ships for five years as part of a government scheme to rehabilitate the domestic shipbuilding industry. However, European companies have lodged a protest, accusing South Korea's shipping industry of receiving unfair state subsidies that would result in oversupply.

"I have no idea what is unfair because our government is going to support and revive our troubled shipping industry as Europe did," Kim said, adding that Europe and China had provided various financial support for the recovery of their shipping industries after the global financial crisis in 2008.

Kim said Hyundai Merchant with 17 ships is small, compared to top global players who have a combined backlog of orders for more than 40 ships. "We should not lose our impetus as large domestic law firms concluded that there is no problem with our government policy."