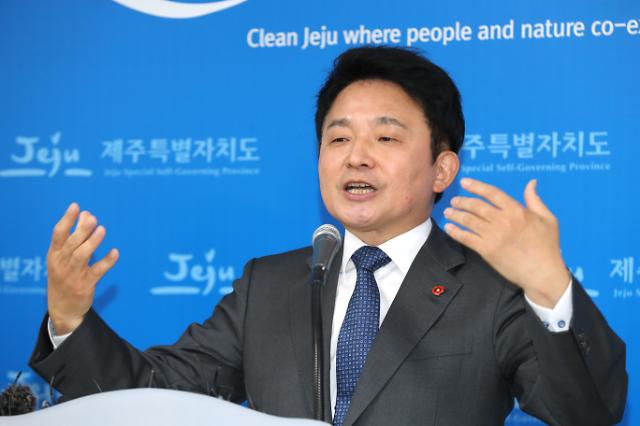 
SEOUL -- South Korea's first for-profit hospital built by a Chinese investor on the southern resort island of Jeju was given the green light to start its delayed business only for foreigners despite protests by civic groups.

On Wednesday, Jeju Governor Won Hee-ryong announced conditional approval of  Greenland International Hospital. Won said the hospital with 47 beds manned by a staff of 134 would only cater to foreign medical tourists without competing with other hospitals in Jeju.

"I ask for your understanding, considering that this is an inevitable choice for the future of Jeju," Won said, adding the hospital would be put under striction supervision with clinics limited to four departments -- plastic surgery, dermatology, internal medicine, and family medicine.

The investor-owned hospital dates back to November 2005 when South Korea promulgated a special law to allow the construction of a health town in Seogwipo in the southern part of Jeju Island. China's Greenland Group was allowed to build a hospital there in December 2015 and completed construction last year at the expense of 77.8 billion won ($69.9 million).

The hospital sent an application for its service in August last year, but approval has been delayed due to opposition by some civic groups and residents. While South Korean hospitals are non-profit., for-profit hospitals can generate profit for investors and remit earnings.

The governor insisted the operation of Greenland International Hospital would not affect South Korea's public medical service system. His office cited various reasons such as the revitalization of tourism, the protection of foreign capital, a possible diplomatic dispute, a national image and a lawsuit.

Jeju used to be a place favored by Chinese property investors and tourists. The island has drawn a large influx of Chinese money, helped by a 2010 visa program that grants permanent residency to investors who purchase property worth $50,000 or more. Land owned by Chinese nationals soared from 1.64 million square meters in 2012 to 9.14 million square meters in 2015.
The island's tourism industry suffered a  setback after Beijing imposed a travel ban in retaliation for the deployment of an advanced U.S. missile shield in South Korea. The two countries agreed on an early turnaround in soured relations under an agreement in October last year, but progress has been slow.