Mao jacket vs. Western suit: Kim's pick will tell how he markets himself: Yonhap 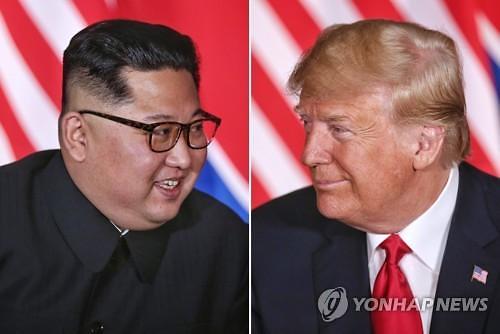 
SEOUL -- North Korean leader Kim Jong-un's outfit for next week's second meeting with U.S. President Donald Trump will offer a glimpse of the messages and intentions the young leader wants to convey to the world, experts said Friday.

During the first summit held in Singapore in June last year, Kim was clad in his trademark Mao-style buttoned-up suit. Maintaining a high-cut hairstyle, he wore horn-rimmed glasses and platform shoes apparently to measure up to Trump, at least to the eye.

Some had forecast that Kim would forgo the traditional attire for the first-ever talks with the American leader with an aim to depict himself as a leader of a normal, modern state. Months earlier, Kim dressed up in a gray-colored Western business suit and tie when he delivered his New Year's speech.

But in Singapore, he stuck to his usual uniform, which "suggested his firm will to maintain the identity of his socialist regime," Yang Moo-jin, a professor at the University of North Korean Studies in Seoul, said.

The Mao suit is known to have been made for the first time in the early 1900s, though Chinese leader Mao Zedong popularized it after rising to power in 1949.
As a symbol of a socialist leader, the garment is also a clear reminder of Kim's predecessors, particularly his grandfather and the national founder, Kim Il-sung. Since taking office in late 2011, the young Kim has striven to link his image to that of his grandfather as a way to legitimize his rule.

"By wearing the clothing familiar with his people on the international stage, he would also have wanted to be shown as a friendly and still reliable leader to the eyes of North Koreans," Yang noted. Kim Jong-un, however, did not have a lapel pin on his jacket bearing the images of his late father, Kim Jong-il, and grandfather.

"The detail may represent his push to open a new era while distancing himself from the old days when any amiable connections with the outside world was beyond imagination," the professor said.

Last month when he delivered a televised speech for the new year, Kim donned a dark-colored Western suit with a gray-blue tie, which sparked same speculation that he may go for Western attire in the upcoming talks with Trump. The second summit is slated for February 27-28 in Hanoi, Vietnam.

As the meeting this time is planned for two days, Kim may put on outfits of both traditional and Western styles in accordance with the features of each day's schedule. Though such speculations could be challenged, there seems to be no doubt that he will set foot on Vietnamese soil on heeled shoes in order not to be seen as overwhelmed by his "bigger" U.S. counterpart.

Kim is reportedly around 170 centimeters tall, some 20 centimeters shorter than Trump. But the difference in their heights was not very noticeable when they shook hands back in June in Singapore. "His styling next week will send sartorial signals regarding key messages Kim wants to deliver to the outside world in an indirect but distinct fashion," Yang said.
(Yonhap)