Talks between Trump and Kim break down with no agreement 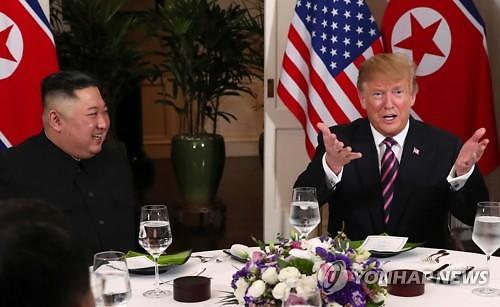 
HANOI -- Talks between U.S. President Donald Trump and North Korean leader Kim Jong-un in Vietnam collapsed as they left the dialogue table without reaching agreements, heralding a tougher process ahead in realizing denuclearization.

Trump and Kim had "very good and constructive meetings" in Hanoi, White House press secretary Sarah Sanders said in a statement, adding the two sides "look forward to meeting again" in the future.

"The two leaders discussed various ways to advance denuclearization and economic driven concepts. No agreement was reached at this time, but their respective teams look forward to meeting in the future," Sanders said. No reason for the absence of agreement was given.

The statement was issued after Kim and Trump left the conference hall in a Hanoi hotel without having their scheduled working lunch and a deal-signing ceremony. The unexpected breakdown of talks in Hanoi underlines difficulties in achieving denuclearization.

For many years, the U.S. and the international community have put strict sanctions against Pyongyang, demanding complete and swift denuclearization. The war of nerves between Pyongyang and Washington has intensified since Trump took office in early 2017 with the two leaders tussling until the last moment over denuclearization.

Although Kim is willing to dismantle nuclear facilities and nuclear weapons, the defiant young leader may not give them away for free. Kim wants more than U.S. cooperation and rewards such as partially lifting economic sanctions. In previous negotiations, North Korea has been reluctant to make concessions without strong U.S. commitments to tangible economic and diplomatic benefits.