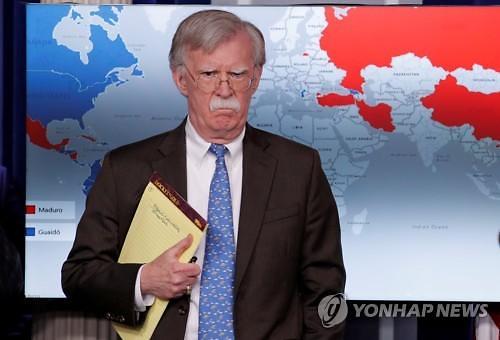 
SEOUL -- U.S. National Security Adviser John Bolton has apparently played the villain to save President Donald Trump's face in his "intentional" walk away from the dialogue table in Vietnam, a former South Korean point man on North Korea said.

"It was an intentional 'no deal or breakdown'," said Jeong Se-hyun, who served South Korea's unification minister from 2002 to 2004 at the height of a dramatic cross-border thaw and led numerous inter-Korean talks.

At the second summit in Hanoi between Trump and North Korean leader Kim Jong-un, U.S. negotiators might have put up Bolton to break a deal as Trump remained upset by testimony by his former attorney Michael Cohen that splashed American newspaper headlines, Jeong said Tuesday in a forum in parliament.

"Bolton played the villain" to raise the threshold because Secretary of State Mike Pompeo Pompeo and U.S. Special Representative for North Korea Stephen Biegun couldn't do it, the former minister said. "As Bolton raised the threshold, and North Korea would have asked for more sanctions."

Trump made similar remarks at first, but he later shifted the blame on to the Democrats: "For the Democrats to interview in open hearings a convicted liar & fraudster, at the same time as the very important Nuclear Summit with north Korea, is perhaps a new low in American politics and may have contributed to the "walk." Never done when a president is overseas. Shame!"