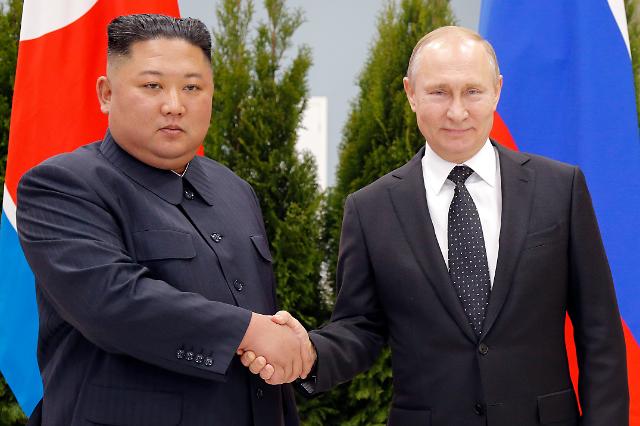 SEOUL -- At his summit with Russian President Vladimir Putin, North Korean leader Kim Jong-un blamed Washington's "unilateral attitude in bad faith" for stalling denuclearization talks, warning the situation on the Korean peninsula has reached a critical point and may return to its original state, according to the North's state media.

"The situation on the Korean peninsula and the region is now at a standstill and has reached a critical point where it may return to its original state as the U.S. took a unilateral attitude in bad faith at the recent second DPRK (North Korea)-U.S. summit talks," Kim was quoted as saying. "Peace and security on the Korean peninsula will entirely depend on the U.S. future attitude, and the DPRK will gird itself for every possible situation."

Showing fatigue at a prolonged deadlock in denuclearization negotiations, Kim has threatened to take a different path unless Washington changes its stance. In a speech at the North's rubber-stamp parliament two weeks ago, he urged Washington to come up with a "fair" and "mutually acceptable" deal by the end of this year.

At the reception, Putin expressed his conviction that the goal of ensuring lasting peace and stability and achieving prosperity on the peninsula and in the region will certainly be attained by the "active involvement of the international community and all the countries concerned," KCNA said.

Putin underscored an international security guarantee for North Korea. "Agreements between two countries will hardly be enough but at the end of the day, it is up to North Korea to decide because it is the country this issue concerns the most," he said, pouring out his heart.

Unhappy with Washington's strengthened diplomatic leverage on the Korean peninsula, Russia has advocated a multilateral forum, which is expected to be raised when Putin meets with Chinese President Xi Jinping during an international forum in Beijing this week.

The summit in Vladivostok was the first meeting between the leaders of North Korea and Russia in eight years, after Kim's late father, Kim Jong-il, met then Russian President Dmitry Medvedev in 2011.

After Kim and Trump failed to reach agreement in their second summit in Vietnam, a North Korean official called for the replacement of U.S. Secretary of State Mike Pompeo with a "more careful and mature" negotiator. Pompeo scoffed at North Korea's demand, saying he would continue to lead nuclear disarmament talks with North Korea.

Ahead of the summit between Kim and Putin, Pompeo said the U.S. is determined not to repeat past mistakes by giving North Korea "a bunch of money in exchange for too little." "We're very focused on getting the right set of incentives for both sides so that we can achieve the objective," he said in an interview with CBS News.

Trump has said that he wants a "big deal" under which North Korea would dismantle all of its nuclear arsenal and related facilities in exchange for the removal of sanctions.