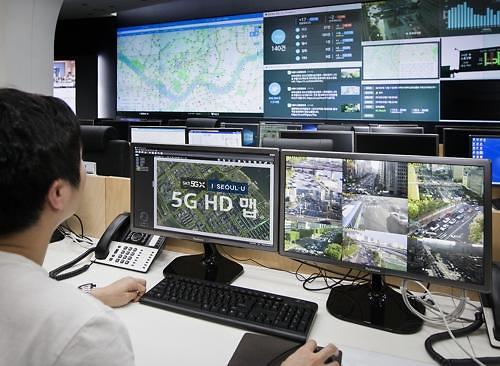 SK Telecom (SKT) said in a statement Thursday that it has signed a partnership agreement with Seoul city government to cooperate in the development of Cooperative-Intelligent Transport Systems (C-ITS), the next-generation on-road HD map information system, which uses 5G-based vehicle-to-everything (V2X) technology to hook vehicles and road infrastructure such as traffic lights onto a network to share data.

C-ITS provides drivers with information of what's happening on the road ahead as well as HD map data. C-ITS alerts drivers of emergency situations or suggest an alternate route to evade traffic jams by analyzing map data collected from autonomous vehicles and on-road infrastructure in real-time.

Currently, C-ITS is established on main roads which stretch outwards from Seoul's central area. SKT and Seoul City plan to install 5G-based advanced driver-assistant system (ADAS) to 1,600 buses and 100 taxis, which mainly travel on roads where C-ITS is installed, to update the HD map system data in real-time.

In addition to its role as a data collector for the map system, ADAS will play a vital role in reducing accidents on buses and taxis. The basic system for autonomous driving assists drivers to travel on the road more safely by avoiding collisions.

SKT and Seoul City, which would deploy ADAS-installed buses and taxis in the capital city during the latter half of this year, plans to expand the number of ADAS-installed vehicles to 5,000 in the future.