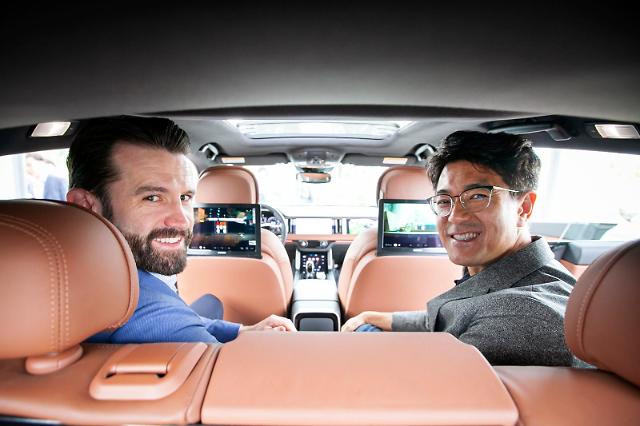 SEOUL -- Through cooperation with its foreign partners, SK Telecom demonstrated next-generation TV broadcasting for traveling vehicles by combining its 5G network and an ATSC 3.0-based broadcast network for the first time in the world in an event on South Korea's southern resort island of Jeju.

SK Telecom (SKT) partnered with Sinclair Broadcasting Group, a major American broadcasting company, and Harman International, an infotainment system unit of Samsung Electronics, to develop the new platform, based on Advanced Television Systems Committee (ATSC) 3.0 which was established in 1982 to develop eponymous standards for digital television.

"In the era of autonomous driving, we will witness a fierce competition in the in-car media service market," SKT's ICT R&D Center head Park Jin-hyo was quoted as saying.

"With this announcement, Sinclair is continuing to partner with market leaders to further develop next-gen broadcasting solutions," Sinclair Broadcast Group head Chris Ripley said. "This collaboration focuses on developing key mobility enhancements of ATSC 3.0 and 5G as a potential value creator for Sinclair and other U.S. broadcasters."

SKT demonstrated two-way media services by interconnecting a 5G network and an ATSC 3.0 broadcast network to Harman's in-car infotainment system and showed different kinds of advertisements playing on each of the three in-car screens while the car was running.

"With the adoption of this solution, the U.S. broadcasting industry will be able to expand the broadcasting advertising market and improve viewer convenience and benefits," SKT said in its statement, adding that upon entering a specific zone, the vehicle automatically received live traffic and popular restaurant information updates via the ATSC 3.0 network.

At CES 2019 in Las Vegas in January, SKT, Sinclair and Harman agreed to develop and commercialize a broadcasting network-based automotive platform. The three companies agreed to seek joint business opportunities in the connected car market.

On Tuesday, SKT also showcased its multi-view service, which enables users to watch terrestrial sports broadcasting from many different angles simultaneously. The ATSC 3.0 network transmits video taken by the main camera, while the 5G network streams live feeds from other cameras for multi-view display.

In a vehicle running on the road around Jeju Technopark, a regional innovation hub, different ads from the same TV program were shown on three personalized screens installed in front of each of the three seats.

It is a multi-view service that allows viewers to choose from different angles. In watching sports games, three screens show different views in the same soccer match and viewers can choose what they want to see and watch it from a different perspective.

Real-time wireless updates of navigation map information were possible. Unlike South Korea knit closely with antennas, communication in many areas in the U.S. mainland is poor. SKT officials said American drivers can access the latest map information at a lower cost in the future.