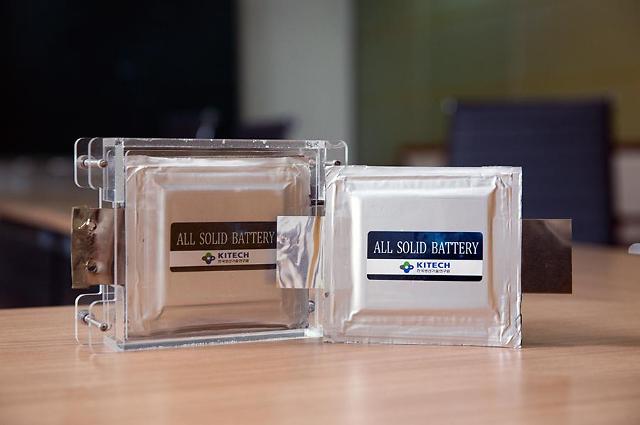 SEOUL -- South Korean researchers have developed a technology to manufacture all-solid secondary batteries for electric vehicles in a structure which drastically reduces the volume of battery packs while eliminating the risk of explosion or fire. The new battery does not cause ignition or explosion even if cut with scissors in the atmosphere.

Currently commercialized secondary batteries are lithium-ion batteries that use flammable liquid electrolytes, which, if overheated or overcharged, could expand and explode. All solid cells use highly heat-resistant, durable oxide solid electrolyte materials, so there is no risk of explosion or fire, according to the Korea Institute of Industrial Technology (KITECH).

The new battery is designed in a structure where multiple units of cells are connected in series within a single cell-stack, making it advantageous to implement high voltage, the institute said in a statement on Monday, adding researchers changed the electrolyte located between the positive and negative from liquid to solid.

Researchers manufactured high-strength complex electrolyte sheets using Garnett LLZO (Lithium, Lanthanum, Zirconium and Oxygen) materials, which are considered the most effective in oxide systems, the institute said. Although LLZO materials have excellent safety, commercialization was not easy due to high costs and the relatively low speed of lithium-ion diffusion.

KITECH said its research team minimized the production cost of LLZO powder and introduced a low-cost continuous production process using a "Taylor" chemical reactor. The LLZO powder developed in this way was combined with a small amount of high-strength ion conductive binders to make a combined solid electrolyte sheet, it said.