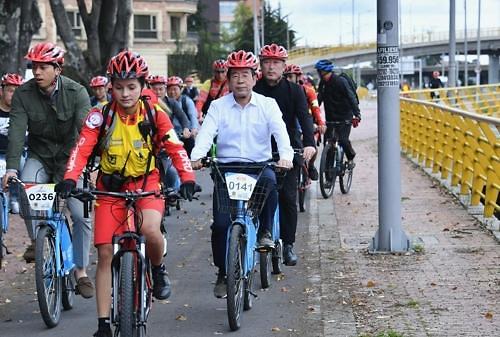 SEOUL -- Impressed with permanent bike paths or the closing of streets to automobiles for cyclists and pedestrians in the capital of Colombia, Seoul Mayor Park Won-soon came up with a "bicycle revolution" to build uninterrupted bike trails in all directions in a city noted for its population density and traffic congestion.

"I will achieve a man-centered bicycle revolution," Park said, promising to build "the best bicycle paradise in the world." The Seoul mayor, who was elected to his third term in June 2018, disclosed his idea during a spot inspection of Ciclovia, a Spanish term that means "cycleway", in Bogota where certain main streets are blocked off each Sunday for runners, skaters and bicyclists.

Lee was credited with increasing the popularity of bicycles for pleasure riding, but he failed to promote bicycles as a regular tool for daily commuting in big cities mainly because of safety concerns. Even on designated paths which were not separated from road traffic, cyclists must often compete with vehicles and pedestrians.

"We are going to establish a bicycle highway that connects Seoul in all directions," Park said, adding that he would build "uninterrupted" bicycle trails separated from vehicles and pedestrians to ensure safe and pleasant use. "Man or bike-centered traffic, as confirmed by Ciclovia, is a big vision and direction around the world. You don't have to hesitate because it's so sure about what the path is for people."

Park's idea is certain to increase congestion as a curtailment of lanes for cars is inevitable. It also requires changes in South Korea's cycling culture for commuting to improve the safety of cyclists.

Seoul with a popularity of 9.75 million people has a well developed public transportation network, but traffic congestion is serious because of millions of commuters even from satellite cities in its neighboring province with a population of 13 million (44 percent).

In recent years, the popularity of public bicycles used by commuters for short-distance transportation is growing in Seoul, and city officials are under pressure to expand the bike-sharing system, which was launched in October 2015 in certain areas. A citywide bike-sharing network in Seoul has yet to come due to various problems.