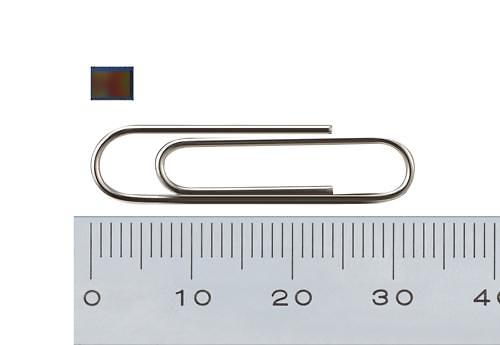 
SEOUL -- Samsung Electronics has unleashed the potential for compact smart devices to get even smaller by revealing the industry's first 0.7-micrometer-pixel image sensor. A micrometer (μm) is one-millionth of a meter.

Samsung introduced "43.7-megapixel ISOCELL Slim GH1", which has 0.7-micrometer-pixels, in a statement released through its news blog on Tuesday. "We are pleased to deliver yet another breakthrough with the industry’s first 0.7μm pixel image sensor," Samsung's sensor business division vice president Park Yong-in was quoted as saying. The company said its new image sensor would be mass-produced by the end of this year.

ISOCELL Slim GH1 is the industry's first mobile image sensor to adopt the smallest pixel size of 0.7 micrometers. The image sensor is embedded with Samsung's technology that reduces color cross-talk and optical loss to ensure the best image quality. It is also capable of absorbing sufficient light in low-light environments like its bigger brothers with 1.7-micrometer-pixels.

In an effort to meet the demand for small and powerful imaging sensors, Samsung has beefed up its ability to produce a wide range of high-performance mobile imaging sensors.

Earlier this year, Samsung and Chinese electronics maker Xiaomi agreed to co-develop powerful camera sensors for Xiaomi smartphones. After unveiling a 64-megapixel CMOS image sensor in May, Samsung unveiled a powerful 108-megapixel image sensor that is equivalent to that of a digital single-lens reflex (DSLR) camera for professional use in August.