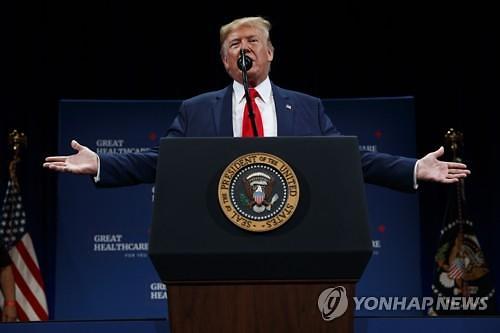 WASHINGTON -- U.S. President Donald Trump said that the United States will be talking to North Korea soon, indicating denuclearization negotiations will go ahead as planned despite the regime's test-firing of a submarine-launched ballistic missile earlier this week.

Trump's remarks come as negotiators from the two countries are expected to meet in Sweden this weekend to resume working-level talks on denuclearizing the regime. "We'll see," Trump told reporters at the White House when asked if North Korea has gone too far with the SLBM launch. "They want to talk, and we'll be talking to them soon. We'll see."

North Korea said Tuesday that the two sides had agreed to resume working-level discussions on Saturday following preliminary contact on Friday. A day later, Pyongyang fired a new SLBM off its east coast in a likely move to increase its leverage ahead of the high-stakes talks.

Along with its intercontinental ballistic missiles, the North's SLBM program is considered one of the biggest threats to the U.S. and its allies, as it could extend the range of the North's nuclear missiles. SLBMs are also hard to detect before they emerge from the water.

North Korea's chief nuclear negotiator, Kim Myong-gil, arrived at a Stockholm airport via Beijing Thursday and appeared to head straight to the North Korean Embassy. Earlier in Beijing, he struck an optimistic tone.

"(We) are heading to working-level negotiations with the U.S," he told reporters at Beijing International Capital Airport. "As the U.S. side sent a new signal, I bear high expectations and optimism, and I am also optimistic about the results."

The two sides have not had formal negotiations since the second summit between Trump and North Korean leader Kim Jong-un in February ended without any agreement. The new talks are expected to focus on finding common ground between U.S. demands for the North's complete and verified denuclearization and Pyongyang's demands for sanctions relief and security guarantees.
(Yonhap)