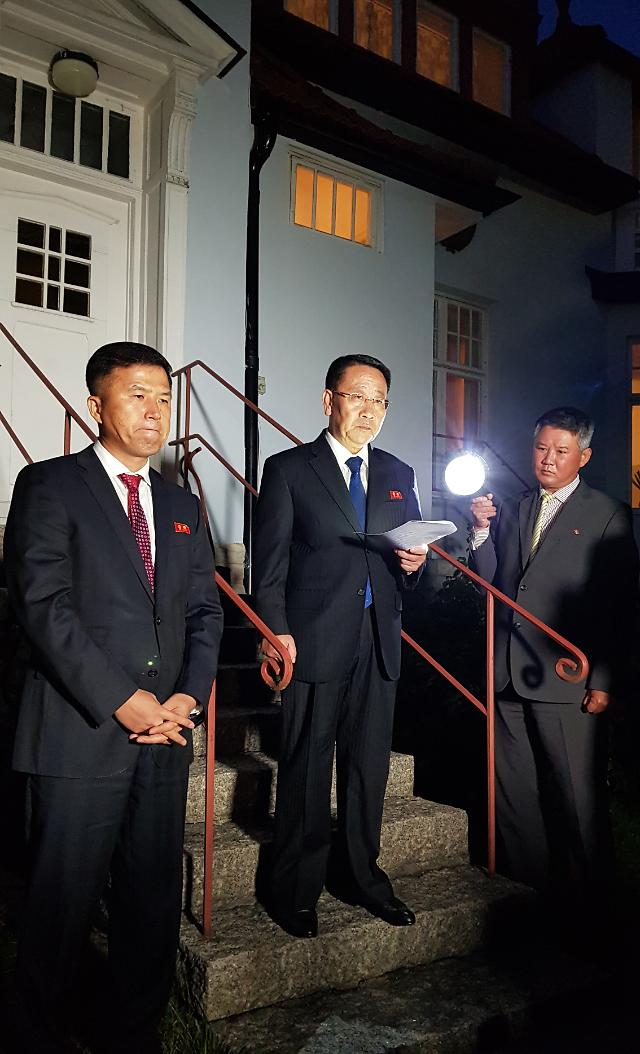 SEOUL -- North Korea condemned a "trite" U.S. attitude as the cause of a failed deal in nuclear talks in Sweden and refused to sit down for fresh dialogue until Washington takes a substantial step to make the complete and irreversible withdrawal of its hostile policy.

At negotiations in Stockholm on October 5, the U.S. side maintained its former stand without presenting "any signs of calculation and guarantee" and sought to abuse dialogue for its domestic political events, an unnamed foreign ministry spokesman said in a statement published by the North's official Korean Central News Agency.

"We have no intention to hold such sickening negotiations as what happened this time before the U.S. takes a substantial step to make complete and irreversible withdrawal of the hostile policy toward the DPRK (North Korea), a policy that threatens the security of the country and hampers the rights to existence and development of its people," the spokesman said.

The fate of future dialogue depends on the U.S. attitude, the spokesman said, warning Pyongyang would permanently walk away unless Washington presents a new proposal. North Korean leader Kim Jong-un has threatened to take a different path, urging Washington to come up with a "fair" and "mutually acceptable" deal by the end of this year.

North Korea's top nuclear negotiator Kim Myong-gil told reporters after meeting with his U.S. counterpart Stephen Biegun in Stockholm that it would depend entirely on the U.S. on whether Pyongyang continues its self-imposed moratorium on nuclear and intercontinental ballistic missile tests, or "revives" them.

The North's foreign ministry spokesman accused Washington of spreading "a completely ungrounded story." "As it has conceived nothing even after the passage of 99 days since the Panmunjom summit, it is not likely at all that it can produce a proposal commensurate to the expectations of the DPRK and to the concerns of the world in just fortnight."

Talks between U.S. and North Korean leaders in Vietnam in February broke down without an agreement. However, U.S. President Donald Trump surprised the world with a historic rendezvous with Kim Jong-un on June 30 and became the first U.S. head of state to step onto the soil of North Korea in the truce village of Panmunjom, a symbol of division and Cold-War confrontation.

"The recent negotiations have left us skeptical about the U.S. political will to improve the DPRK-U.S. relations and made us think if it isn't its real intention to abuse the bilateral relations for gratifying its party interests," the North's spokesman said. "As we have clearly identified the way for solving problem, the fate of the future DPRK-U.S. dialogue depends on the U.S. attitude, and the end of this year is its deadline."

Trump has advocated a "big deal" under which North Korea would dismantle all of its nuclear arsenal and related facilities in exchange for the removal of sanctions. Kim Jong-un has called for gradual steps as North Korea regards Washington's security guarantee as more important to ensure the survival of the regime.