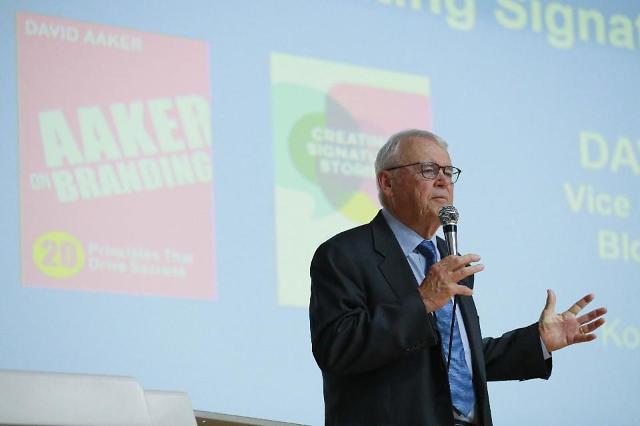 David Aaker speaks during a lecture on brand marketing at Korea University's Woodang Hall in Seoul on October 11. [Photograph by Yoo Dae-gil]


SEOUL -- For successful marketing, companies need a brand vision with higher purposes, coupled with a new game-changing subcategory and a strategy to interact with customers and hit their sweet spot, an American specialist in marketing said.

"Every organization needs a vision. You need to know where you are going. Customers need to know what the brand promises and whether it is delivered or not," David Aaker, vice chairman of Prophet, an American consulting and brand marketing firm, told an academic lecture on Friday at the Korea University Woodang Hall in Seoul.

The event was hosted by the Korea University Future Forum and a project group for the development of Korea University Medical Center's Precision Medicine Hospital Information System. It was sponsored by Aju News Corporation.

"You would have to be concerned with more than just making money," Aaker said, calling for higher purposes such as making better brand images, a role in the society and how to treat employees. "The brand vision has an impact on everything," he said, adding that for healthy growth, an opportunity should be provided for employees.

For example, the expert said that Japan's beer maker, Kirin, used to be the king of beer at its home market but Asahi came with its Asahi Super Dry beer, a subcategory, in 1986 and really appealed to young people "because it looked cool." Asahi's market share jumped from 10 percent in 1986 to 38 percent in 2000 and other Japanese makers followed suit with subcategories, he said.

In the computer industry, Aaker said that IBM was dominant in the 1970s but other companies with specialized subcategories such as Dell's built to order computers and Apple's user-friendly interface made remarkable achievements. "You have to have some customer must-haves that create new or superior buying or used experiences and create a meaningful brand relationship."

Although companies give their brand visibility, customers are not really interested in their offering, said Aaker. "You must find out what they find interesting, what they interact with. Those factors can be used to hit the customer's sweet spot. Those are the things that would bring customers together."

Aaker created the Aaker Model, a marketing model that views brand equity as a combination of brand awareness, brand loyalty, and brand associations. The model outlines the necessity of developing a brand identity, which is a unique set of brand associations representing what the brand stands for and offers to customers an aspiring brand image.

As a successful case in the U.S. market, Aaker cited a campaign by South Korea's Hyundai auto group to connect with American consumers. "What Hyundai did was to reposition their brand as being comparable to higher quality brands," he told Aju Business Daily earlier. He said that Hyundai's challenge was to remove the reason not to buy as consumers had to sacrifice quality in buying Hyundai cars, which were perceived as low quality.

"That was the reason not to buy it. So one of the most important things in branding and marketing is to be concerned with reasons not to buy. Because if there's a reason not to buy, you are not relevant. They don't consider you," said Aaker. "It's a very difficult problem to overcome when you're out with that image and you have to be spectacular."

"I think they were brilliant how they confidently rolled out their marketing. Again and again and again they did spectacularly," Aaker said. "They connected with consumers who needed to see to change their opinion on what a Korean car manufacturer should be."

To attract young consumers who care much more about cost-effectiveness rather than brand, he called for the relationship with customers because the brand does to connect. "One of them is to make sure that price isn't the only consideration."