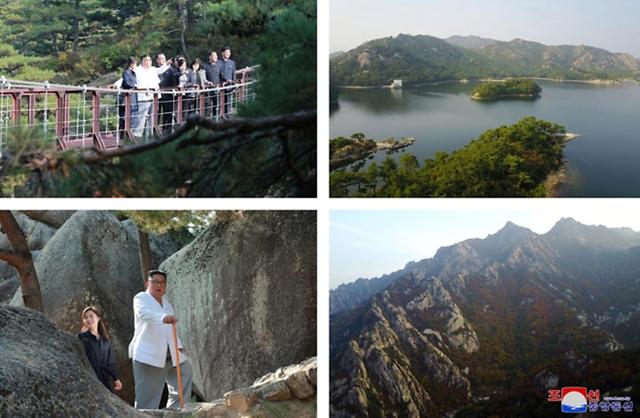 
SEOUL -- North Korean leader Kim Jong-un ordered the complete demolition of hotels and other facilities built by a South Korean company in a tourist resort for a cross-border tour program to transform it into a modern world-level tourist destination, criticizing a "mistaken" policy adopted by his late father to capitalize on foreign capital.

During his inspection of the Mount Kumgang resort located just north of the inter-Korean border, Kim gave an instruction "to remove all the unpleasant-looking facilities of the south side with an agreement with the relevant unit of the south side and to build new modern service facilities our own way," according to Pyongyang's official Korean Central News Agency (KCNA).

Kim set forth detailed tasks for changing "awkward-looking" facilities into a modern cultural tourist resort while making "sharp criticism of the very wrong, dependent policy of the predecessors who were going to rely on others when the country was not strong enough," KCNA said.

Tourist facilities in the resort were built by Hyundai Asan, an arm of South Korea's Hyundai Group, under an agreement with North Korea's late leader Kim Jong-il. Pyongyang allowed South Korean tourists to visit Mount Kumgang in 1998 to receive hard currency from abroad and opened a land route in 2003. The tour program to Kumgang stopped after a South Korean housewife was fatally shot by a North Korean guard in 2008.

"Due to the mistaken policy of the predecessors who tried to get benefits without any efforts after just offering the tourist area, the mountain was left uncared for more than ten years to leave a flaw and the land is worthy of better cause," the leader was quoted as saying.

"The buildings are just a hotchpotch with no national character at all, and that they were built like makeshift tents in a disaster-stricken area or isolation wards," Kim said, adding facilities there "are not only very backward in terms of architecture but look so shabby as they are not taken proper care of."
"It was extremely wrong that a few blocks of such buildings reminiscent of temporary buildings at construction sites were set up for the tour of Mount Kumgang, the world-famous mountain."

South Koreans will be allowed to visit the resort after it was rebuilt, Kim said, adding North Korea would manage cross-border tours. "We will always welcome our compatriots from the south if they want to come to Mount Kumgang after it is wonderfully built as the world-level tourist destination but what is important is for our people to have the shared view that it is not desirable to let the south side undertake the tour of Mount Kumgang."

In his New Year message, Kim called for the unconditional resumption of suspended inter-Korean projects such as cross-border tours and a joint industrial zone in the border town of Kaesong, which used to be a symbol of inter-Korean cooperation. The Kaesong zone, which was opened in December 2004, once hosted about 120 South Korean firms manned by more than 50,000 North Korean workers. Seoul shut it down in 2016 in retaliation for the North's ballistic missile and nuclear tests.