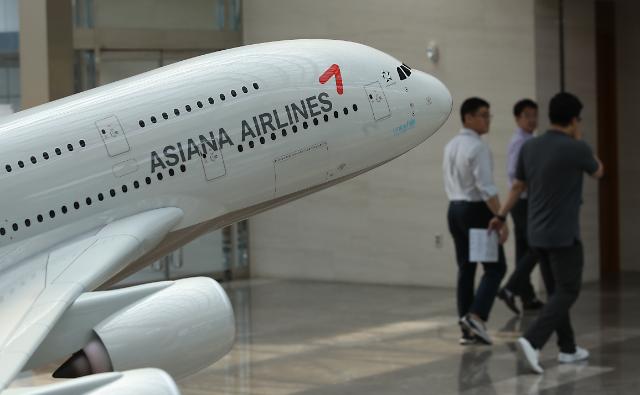 SEOUL -- There was no surprising valuable in the proposed sale of South Korea's second-largest flag carrier, Asiana Airlines, as big business groups stayed away, reflecting difficulties of the domestic airline industry where competition is getting fierce due to an aggressive business strategy by low-cost carriers.

Aekyung, a mid-sized business group specializing in home, health, and beauty care products for daily use, formed a consortium with Stone Bridge, a private equity fund, and Korea Investment & Securities to acquire a controlling 31 percent stake in Asiana, which has been up for sale in return for a bailout from creditors. The winner would acquire Asiana's affiliates including two budget carriers, Air Seoul and Air Busan as well as new shares.

Aekyung, which controls Jeju Air, a budget carrier based on the southern resort island of Jeju, highlighted the experience of having operated an airline. "There are many overseas cases in which global competitiveness was strengthened through mergers and acquisitions among airlines," it said in a statement.

HDC Hyundai Development, the parent entity in HDC Group, teamed up with Mirae Asset Daewoo, the brokerage subsidiary of Mirae Asset, a major financial and asset management group in South Korea, that has invested aggressively abroad. HDC called for fair screening in the sale of Asiana, revealing confidence in financing. "It should be a fair sell-off under any circumstances," HDC said in a statement.

In April, Kumho Industrial, the holding company of Kumho Asiana, offered to sell its airline business under an agreement with Korea Development Bank (KDB), a state policy bank. Kumho hopes to complete the sale of Asiana and its affiliates within this year. However, KDB has failed to attract big business groups due to Asiana's hefty debt, poor margins in the airline industry and the uncertain business environment at home and abroad.

There were two full-service airlines, Korean Air and Asiana, and six low-cost carriers -- Jeju Air, Jin Air, T’way Air, Air Busan, Eastar Jet and Air Seoul. Jeju Air has made an aggressive investment to increase the size of its fleet and air routes. The low-cost carrier aims to reduce fuel costs, maintenance expenses and rental fees through the purchase of new planes.

Jeju Air CEO Lee Seok-joo said in March that South Korea's low-cost carrier market would see a drop in profitability due to the entry of three more budget carriers -- Air Premia, Fly Gangwon and Aero K, which were licensed this year to launch services. "Travel demand is still growing, but supply is expanding at a tremendous pace, and competition is growing," he said, expressing short-term concerns about profitability problems caused by competition"

Asiana has tried to raise money through asset sales, but the airline lost market confidence in April due to its unclear 2018 financial statement, raising concerns about its debt repayment. Kumho Asiana's founder Park Sam-koo abandoned all executive posts at group units to take responsibility for causing market disturbances and liquidity woes. The group's ruling family has offered shares and private assets as collateral.