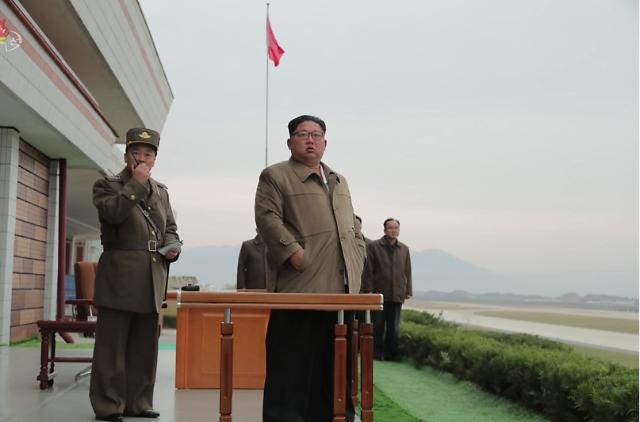 Moon sent a personal letter on Nov. 5 to invite Kim to the South Korea-ASEAN special summit slated for Monday and Tuesday in the southeastern port city of Busan, but North Korea could not find any reason for its leader to travel for the event, according to the Korean Central News Agency (KCNA).

"There is no reason for us not to be grateful for it, if the personal letter contained the sincere trust in the State Affairs Commission (SAC) Chairman and invitation carrying earnest expectation," the KCNA said.
"We are grateful for the trust and sincerity of the south side but we hope it would understand the reason that we failed to find out the proper reason for the SAC Chairman to visit Busan," it added.

The KCNA criticized South Korea for resorting to outside help in trying to resolve inter-Korean affairs, apparently taking issue with the mostly stalled cross-border projects in the face of global sanctions Washington wants to keep in place until there is meaningful progress in denuclearization talks.

"The beclouded air of South Korea is so skeptical about the North-South relations and the South Korean authorities are still not away from the misguided stand of settling all the issues ... not national cooperation. This is a stark reality today," it said. "It is important to choose the proper time and place, if everything is to be done well," it added.

South Korea had hoped Kim would join the upcoming event and possibly hold an inter-Korean summit to jump-start cross-border relations. North Korea has blamed South Korea for the current stalemate, saying that Seoul has not implemented any agreements they reached during their three summit talks last year.

Pyongyang has not responded South Korea's repeated offers for cooperation and talks, taking issue with what it sees as too great a dependence on the U.S. in determining inter-Korean affairs and urging Seoul to take the lead. North Korean recently demanded the South remove all of its resort facilities built at Mount Kumgang in the communist state in apparent frustration over the limited progress in resuming a long-suspended tour project to the mountain, a major symbolic cross-border project.

The KCNA said that it would be a huge miscalculation if an invitation letter changed the current situation in inter-Korean relations after the South had squandered a rare opportunity for reconciliation and cooperation. "It is doubtable that the meeting between the North and the South will be meaningful at this time," it added.
(Yonhap)