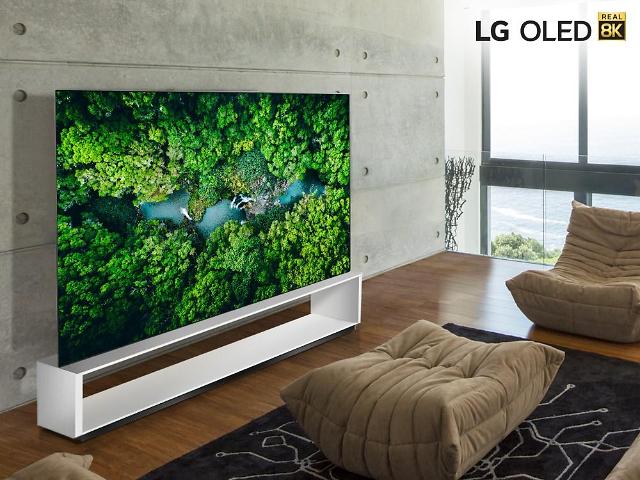 LG said that at CES 2020 to be held in Las Vegas for four days from January 7, the company would showcase 88-inch and 77-inch 8K resolution OLED TVs equipped with "ALPHA 9 Gen 3", a third-generation artificial intelligence (AI) processor chip that utilizes upgraded processing speed and machine learning algorithm to provide optimized video and sound.

LG and its domestic rival Samsung Electronics have been locked in an unyielding battle over who creates "true" 8K TVs. LG focuses on OLED technology while Samsung promotes quantum dot LED (QLED) TVs which use nano-crystals to enhance the brightness and color of its display.

At the center of contention is Contrast Modulation (CM). The International Committee for Display Metrology (ICDM) defined the measurement of CM which describes accurately and quantitatively how distinguishable the neighboring pixels are from each another. For any TV display to deliver the resolution indicated by its pixel count, ICDM requires the minimum CM value to exceed a threshold of 25 percent for images and 50 percent for text.

LG argued Samsung's QLED TVs fell short of ICDM's requirements. LG officials said the stated resolution of a display does not depend on only meeting or exceeding a specific number of pixels, but also on whether those pixels can be adequately distinguished from one another.

LG and Samsung threw a haymaker at each other through TV commercial films claiming that their display technology was better. LG emphasized the better picture quality of its OLED display over QLED display while Samsung criticized the drawbacks of OLED displays.

Along with its new premium OLED TVs, LG has another hidden card up its sleeve for CES, saying it would showcase a new 65-inch NanoCell liquid crystal display (LCD) 8K TV model equipped with the ALPHA 9 Gen 3 chip. LG's NanoCell LCD technology has an increased range of color and a better viewing angle than others.

The NanoCell display has special light-absorbing material that blocks off the wavelengths of light between the red and green color filters to provide more vibrant and clearer colors. It targets consumers who favor LCD TVs with a wider range of color and viewing angles.