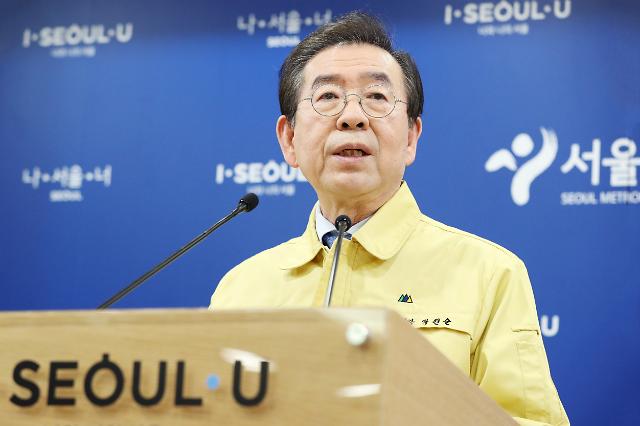 Seoul Mayor Park Won-soon calls for strong measures to curb the spread of a virus epidemic in the capital on February 21. .Seoul.n [Yonhap News Photo]


SEOUL -- Anxiety and jitters are growing among commuters using public transportation to go to their worksites in Seoul, which has reported nearly 20 patients infected with a highly contagious new coronavirus, including six alone in Jongno, a district lined with many important landmarks and high-rise office buildings.

Jongno in the center of Seoul is referred to as the face and heart of South Korea because of its important role in politics, economics, culture, and history as the capital city. It is home to many important landmarks such as palaces, the presidential residence, foreign embassies and government buildings.

It's common to see nearly all commuters wearing facial masks aborad public buses and subway trains with a nervous look, especially after the number of infected patients started soaring on February 18. As of Friday afternoon, 204 patients have been sent to isolation wards across the country since the first case was reported on January 20.

The sudden surge in the number of patients fueled a widespread health scare, prompting Seoul Mayor Park Won-soon to ban any rallies and demonstrations at public plazas in the center of the densely populated capital and close more than 3,000 social welfare facilities.

In an epidemiological survey, health officials found that four people were infected after dining at a social welfare facility in Jongno. One was blamed for transmitting the virus after attending a Protestant church service.

"To prevent the spread of COVID-19 in local communities early, the Seoul Metropolitan Government will mobilize all administrative power to do its best," Park said, issuing a special order to shut down all chapels and propagations facilities run by Shincheonji Church of Jesus in Seoul.

Shincheonji, a religious organization that was once caught up in a row over alleged heresy, has been the target of public fury since a 61-year-old woman was guaranteed on February 17 after attending services at a Shincheonji temple in the southeastern city of Daegu.

The number of coronavirus patients has increased sharply, mostly in Daegu and its surrounding North Gyeongsang province. Health officials are tracking 9,300 people affiliated with the Shincheonji branch in Daegu. Shincheonji claims the number of followers is far above 100,000 nationwide.

An investigation is under way to see if Shincheonji has been involved in religious exchanges with followers in China, according to the Korea Centers for Disease Control and Prevention (KCDC). Almost 70 percent of South Korea's confirmed patients were related to Shincheonji. KCDC director Jeong Eun-kyeong said on Friday that 544 followers have reported symptoms in a telephone survey.

"Shincheonji is now like a host who spread COVID-19 on a large scale," Park said, calling for strong steps against facilities run by the controversial religious organization.