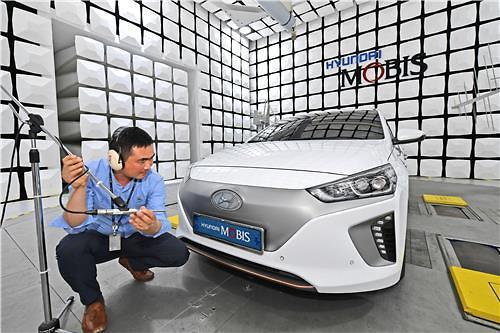 SEOUL -- Hyundai Mobis, the parts-making wing of South Korea's Hyundai auto group, has developed a new virtual engine sound system using grille covers. The grille was used as a vibrating plate to reduce weight, size and cost while improving the performance of a warning noise for pedestrians.

Usually, speakers consist of an actuator that generates real sound and a vibrating board that propagates the sound to the outside. Hyundai Mobis said its new system attached the actuator to the back of the front grille cover and used the grille itself as a vibrating plate. As a result, the new system reduced the weight to one-third of existing products and the size to half. The price of components was lowered.

Hyundai Mobis said new functions such as the sound of direction indicator lamps and a state of charge alarm were added to the new sound system, which can also be used as a speaker to play music during outdoor activities.

New electric and hybrid vehicles in the European Union must be equipped with an acoustic vehicle alerting system (AVAS) so that pedestrians and visually impaired persons can more easily hear the approach of cars. AVAS generates a sound when electric vehicles are reversing or running below 20 kilometers (12 miles) per hour.

For electric and hybrid models, the Hyundai group has introduced a virtual engine sound system that provides synthetic audio feedback mimicking the sound of an idling internal combustion engine. Hyundai Mobis said the new system is competitive because there is no loss of sound pressure or the distortion of sound quality.