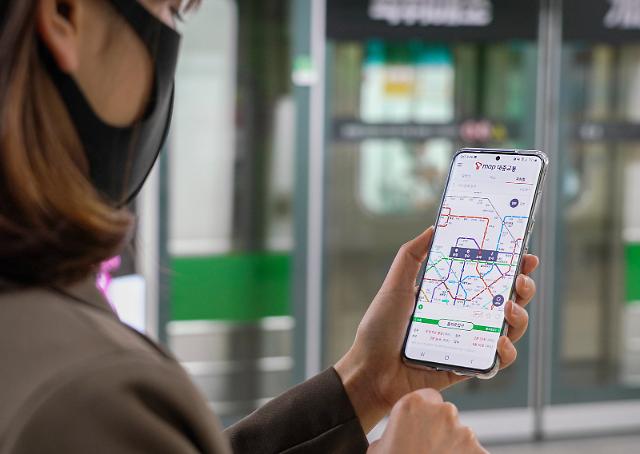 SEOUL -- SK Telecom, a top mobile carrier in South Korea, released a smartphone service that provides information about the level of congestion in subway trains by using big data collected from subway stations and trains to help commuters reduce the chance of contacting coronavirus carriers.

About 7.2 million people use subway trains during commuting hours every day in Seoul and its satellite cities. To avoid cross-contamination inside crowded subway cars, all commuters wear masks and use hand sanitizers to fight their way to work and back home.

Big data used to predict the congestion of subway cars was collected from mobile communication base stations and WiFi access points inside 596 subway stations. The level of congestion in each car of subway trains will be available by September.

South Korean companies have followed anti-epidemic guidelines, with some introducing telecommuting. About 62 percent of workers used to stay at their homes for teleworking, but many returned to worksites in May.

The epidemic had been well under control until the first week of May when Seoul was hit by new cases related to clubs and bars in Itaewon, the heart of LGBTQ nightlife. Health officials reported an average of 27 confirmed COVID-19 cases every day between May 3 and June 3. Cases involving commuters who used public transport have not been reported.