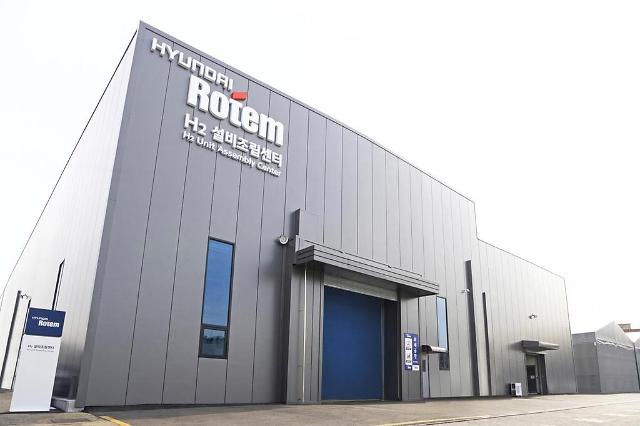 SEOUL -- Hyundai Rotem, a subsidiary of South Koreas Hyundai auto group, will start the operation of the company's hydrogen extractor factory in a bid to accelerate the development of hydrogen economy infrastructure and the popularization of fuel cells as an alternative to fossil fuels.

A hydrogen extractor is a device that extracts hydrogen from natural gas. It is a key part of an energy infrastructure based on hydrogen-powered fuel cells. The hydrogen extraction and fuel cell charging processes require less energy than fossil fuel-based ones. Once the hydrogen-based energy chain kicks into a fully self-sustainable cycle, it will emit no greenhouse gas and no longer rely on the use of fossil fuel.

Hyundai Rotem said in a statement on December 14 that the company has converted a car electronic parts factory in Uiwang south of Seoul into a hydrogen extractor manufacturing plant with the capability of producing 20 devices a year. The company said that 20 hydrogen extractors will be able to create about 4,700 tons of hydrogen fuel, which is enough to fill up about 850,000 Nexo, a fuel cell-powered sport utility vehicle released by Hyundai Motor in 2018.

"As we expect hydrogen-related businesses to grow rapidly, we will stably supply hydrogen extractors to contribute to the upgrading of South Korea's hydrogen industry-related ecology," a Hyundai Rotem official was quoted as saying. The company said that it would build more extractor factories depending on market demands in the future.

On December 10, the company announced that it has localized up to 80 percent of parts used in the hydrogen extractor. Hyundai Rotem said it would fully localize parts, including catalytic agents, up to 100 percent by March next year. Catalytic agents, or catalysts, react with various chemicals including ammonia or accelerate the electrolysis of water to produce hydrogen fuel. Normally, precious metals are used to create catalysts with maximized efficiency.