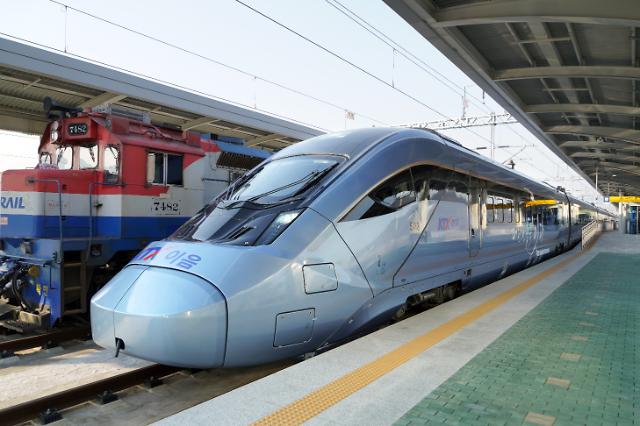 
SEOUL -- South Korea's high-speed electrical multiple unit called "KTX-Eum" made its commercial debut. It is an eco-friendly train that was designed to provide pleasant travel with every seat aligned with the window and featured a distributed power system.

The six-car unit train with 381 seats was manufactured by Hyundai Rotem and operated by Korea Railroad Corp. (KORAIL). From January 5, it will run at a maximum speed of 260 kilometers (162 miles) per hour on a route between Cheongnyangni Station, a Seoul terminus of passenger trains serving the eastern part of South Korea, and Andong, some 180 km southeast of Seoul.

In a ceremony on January 4, KORAIL CEO Sohn Byung-seok called for a trial run of railways from South Korea to Russia through North Korea. "Korean railways are dreaming of entering the continental railroad beyond South and North Korea," he said, referring to the proposed establishment of a railway line running across the Korean peninsula to link with a Eurasia railway project.

South Korea saw the opening of an inter-Korean industrial zone in Kaesong just north of the border in December 2004 as well as cross-border roads and rail tracks across the Demilitarized Zone (DMZ) which has split the peninsula since the Korean War ended in 1953 with no peace treaty signed.

Originally, the cross-border line was to be extended to Pyongyang and the northwestern border city of Sinuiju, or even to China's railway system, under an ambitious project to set up a transportation network connected with trans-continental railways. However, the project was shelved due to cross-border tensions. Separate projects to build gas pipelines and railways from Russia to South Korea along the east coast were also scrapped for political reasons.