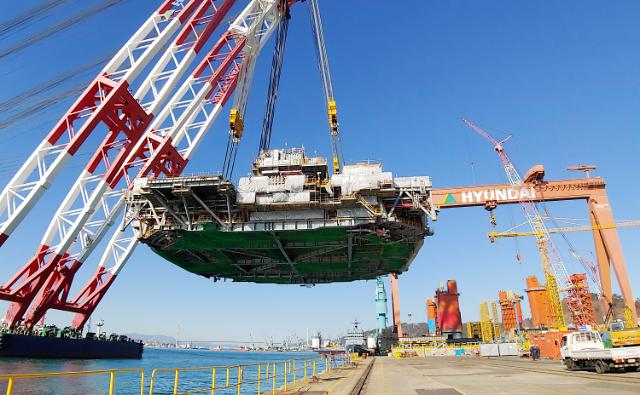 
SEOUL -- South Korea's Hyundai shipyard set a new domestic record by lifting and assembling the 9,100-ton topside of a deep-water, semi-submersible offshore plant that has been under construction on a 2018 order from Murphy Oil, a Houston-based oil and gas exploration company.

Hyundai Heavy Industries (HHI) said on January 20 that it has successfully lifted a super-large marine facility at once to install it in the hull of the King’s Quay floating production system (FPS) by using a giant 10,000-ton crane at its shipyard in the southeastern port city of Ulsan. As a result, the shipbuilder can greatly shorten the period of construction.

Delivery is to begin after the shipbuilder installed additional facilities such as a living quarter and a waste heat recovery unit in June. The King’s Quay FPS is capable of processing up to 80,000 barrels of oil and up to 100 million cubic feet of gas a day in Green Canyon in the Gulf of Mexico. Its hull weighs about 11,000 tons and the two-level deck houses topside modules for processing oil, gas and water.