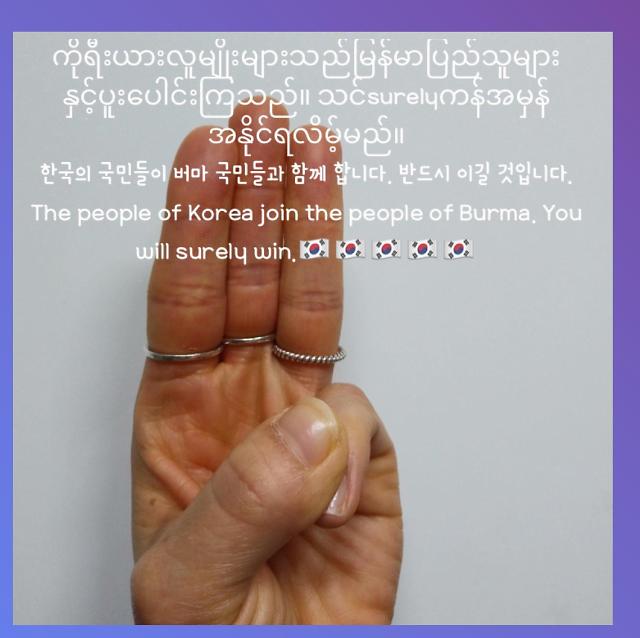 
SEOUL -- Thousands of South Koreans, young and old, have joined an online relay campaign to express sympathy and support for Myanmar's "Spring Revolution" that began in early February against a coup by top army commander Min Aung Hlaing.

Online protestors used various hashtags including "#미얀마_민주주의" (Myanmar democracy in Korean) and "#DemocracyForMyanmar" to upload posts including images that show a "three-finger salute" gesture, inspired by a hand sign from "The Hunger Games" books and films series. It has become a symbol of resistance and solidarity in Southeast Asia since Thai activists adopted it after a coup in 2014.

Along with social media users who launched an online relay campaign by tagging their friends in support posts, South Korean online community users have voiced support by uploading posts and comments using slogans such as "Stop the Coup!" and "Democracy For Myanmar!." Some users uploaded pictorial and video footage of real-life situations, sent by friends and relatives living in Myanmar. 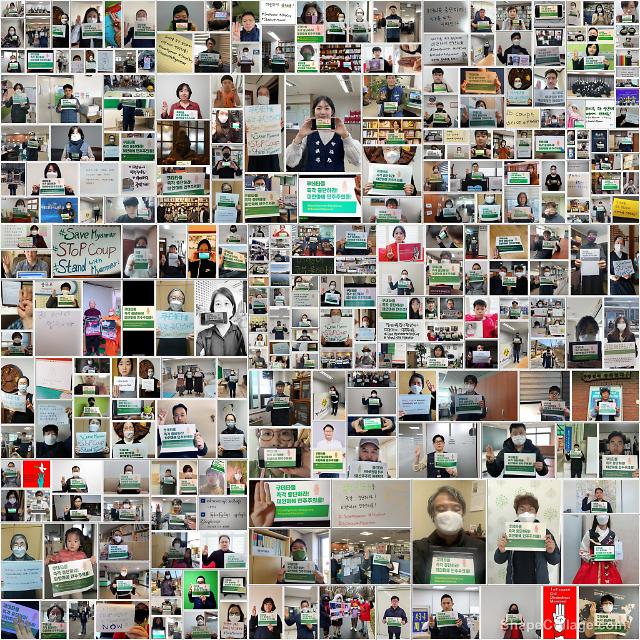 "I have nothing to say. I am only sad and angry," Wonyong, a user from South Korea's major online community Clien, said in a comment added to a post that showed photographs of soldiers cracking down on protestors. Another user SlowKnight said: "It truly saddens me as I have visited Myanmar before. The people who live there were good, humble people. I wish peace would come to Myanmar soon."

The campaign has attracted support from local communities and religious groups. Civic groups in the southern city Gwangju, the site of a bloody civic uprising in May 1980, launched a charity campaign to collect funds for daily necessities and medical supplies for Myanmar citizens. More civic groups from Seoul and other cities followed suit.

Many South Koreans feel sympathetic to the uprising in Myanmar because it is reminiscent of pro-democracy protests in Gwangju. A brutal military crackdown left hundreds of citizens killed or missing and thousands injured. The Gwangju uprising has been depicted in films and novels including "A Taxi Driver", a popular 2017 film directed by Jang Hoon."

[This image was captured from lawmaker Park Joo-min's Facebook page]

There was no collective movement, but some South Korean politicians have expressed support. Park Joo-min, a Democratic Party lawmaker, visited Myanmar Embassy in Seoul on March 9 to lodge a protest. "We demand that the Burmese military immediately stop its brutal suppression against Myanmar citizens," he said.

Park's action came three days after President Moon Jae-in released a post in Korean and English through Twitter on March 6. "Use of violence against the people of Myanmar must stop now. There should not be any more loss of lives. We condemn the violent suppression of protests by the military and the police forces and strongly call for the immediate release of all those detained, including State Counsellor Aung San Suu Kyi," Moon said, calling for the quick, peaceful restoration of democracy in Myanmar.

Religious groups were more active and issued a volley of joint statements condemning Myanmar's cruel military crackdown. The Catholic Priests Association for Justice held a mass of protest in front of the Myanmar Embassy in Seoul on March 19 and launched a charity program to help Myanmar people staying in South Korea.