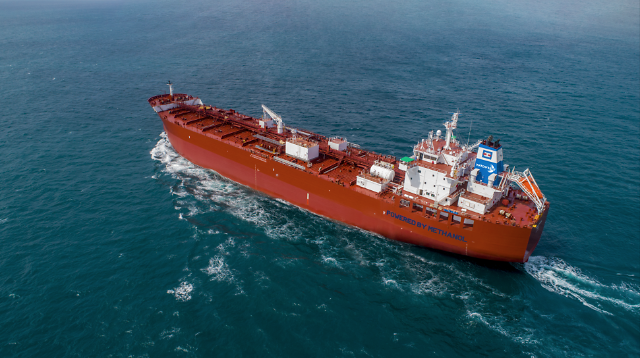 
SEOUL -- South Korea has revised regulations to approve the domestic operation of ships powered by methanol, as the inflammable liquid is emerging as a new clean-burning fuel thanks to lower production costs and significantly reduces greenhouse gas emissions.

The Ministry of Oceans and Fisheries said it has worked out revised inspection criteria for eco-friendly methanol fuel propulsion vessels. The revision requires inspectors to check whether ships are safe from explosions and fires caused by the characteristics of methanol and ethanol. They should also check structural strength.

"As regulations on the marine environment are gradually tightened around the world, building eco-friendly ships is not an option but a must," Choi Jong-wook, a ministry official in charge of maritime industry technology, said in a statement on June 17. "The government will take active support measures for the development and distribution of various eco-friendly ships, including methanol-powered ships."

Unlike natural gas that requires high pressure and cryogenic temperatures, methanol is easy to store and transport even at room temperature and general atmospheric pressure. It is relatively less expensive to build an initial infrastructure. Methanol can be used with high efficiency in marine diesel engines after minor modifications using a small amount of pilot fuel.

Risk classification societies and the International Maritime Organization (IMO) have developed standards and guidelines for methanol as a marine fuel.

The cost to convert vessels to run on methanol is significantly less than other alternative fuel conversions and only minor modifications are needed for existing storage and bunkering infrastructure to handle methanol. One problem with high concentrations of methanol in fuel is that alcohols corrode some metals.