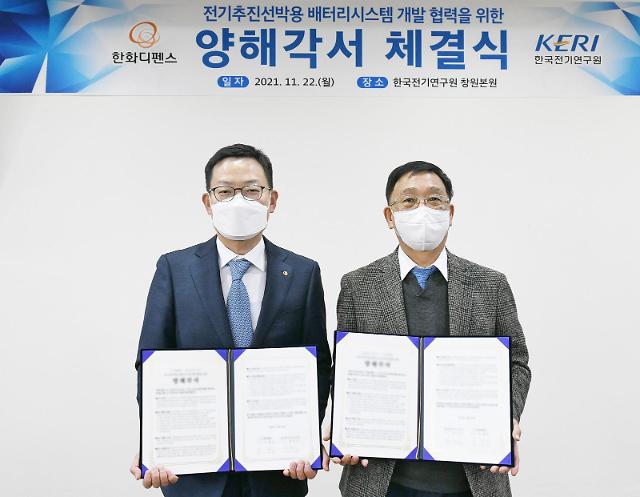 
SEOUL -- Hanwha Defense, a defense contractor affiliated with South Korea's Hanwha Group, teamed up with a government-supported research body to develop a high-power, high-safety battery system for ships and apply next-generation batteries such as all-solid-state batteries to electric propulsion ships.

All-solid-state batteries are seen as a next-generation power source for electric vehicles as solid electrolytes are nonflammable and more stable.
Hanwha Defense said it has signed a memorandum of understanding with the Korea Electrical Research Institute (KERI) to expand cooperation in the development of lithium battery systems for submarines to military and civilian ships.

KERI has transferred technology to a domestic company for the mass production of sulfide-based solid electrolytes for all-solid-state batteries at low prices. Lithium sulfide (Li2S) used for solid batteries is expensive and requires a lot of energy in production. A KERI research team has developed a method that can mass-produce sulfide-based solid electrolytes at low prices.

"We will try to supply a battery system with the world's best performance, safety, and reliability to the market by combining our battery system design and manufacturing technology with KERI's research and test infrastructure," CEO Sohn Jae-il said in a statement on November 23.

Demands for eco-friendly ships and energy storage systems (ESSs) are growing due to tightened regulations on greenhouse gas emissions from ships. ESS is a power storage system that consists of batteries or specially designed battery packs. An electric propulsion ship equipped with ESS drives a propulsion motor with power stored in batteries or supplied from a generator. As ships contain large-capacity batteries,  safety test certification is important.

Hanwha Defense has accumulated technology and know-how related to large-capacity marine energy storage devices through the development of a submarine battery pack that demonstrated world-class safety and reliability through a performance verification test in a harsh test environment. The company has developed its own energy storage system for state-run ships.

Hanwha Defense has been chosen to lead a three-year state project aimed at developing technology for a marine energy storage system with a high level of safety. In September, the company tied up with Korean Register (KR), a maritime classification society, to apply accumulated technology, especially in the field of submarine lithium-ion batteries, to civilian eco-friendly ships.

Hanwha Defense and KERI would work together to complete the development and application of submarine lithium battery systems and cooperate in ESS safety for submarines and vessels. KERI has been involved in a project to develop an electric-drive propulsion technology for warships.