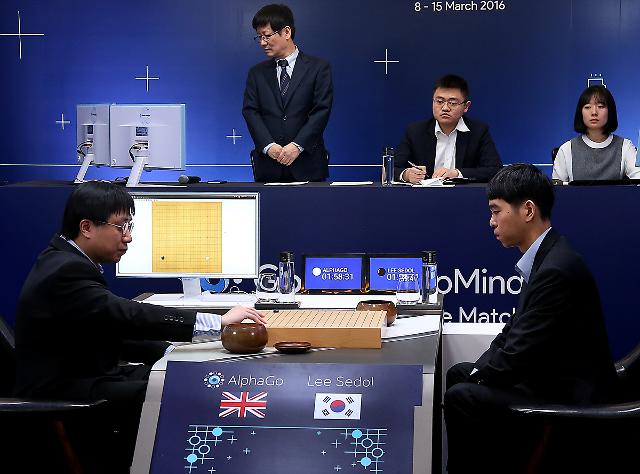 Lee, one of the world's best Go players, resigned in 186 moves after Google's new computer program AlphaGo secured a clear lead in nearly three hours and a half hours.

The showdown between man and machine was seen as a major test of what scientists have achieved in artificial intelligence (AI), and AlphaGo's victory shocked experts who had predicted a clear-cut victory by the 32-year-old champion of the highest rank with 18 international titles under his belt.

Lee said he was stunned by AlphaGo's ability saying he had never thought of losing to the computer program. "I was surprised ... and I express my respect to programmers who made AlphaGo."

"I did not think of losing," he said, admitting he could not recover after making early mistakes while AlphaGo attacked him with unexpected moves. "From now, it's 50-50."

"We are very pleased (with) AlphaGo's performance, " Demis Hassabis, the head of British-based tech firm DeepMind, said, predicting Lee would come with "different and new strategies" for the remaining games.

"AlphaGo's standard appears to be high but it still lags behind Lee, and I think he will win the next game," said Choi Myung-hoon, the coach of South Korea's national Go squad.

The landmark event at a hotel in Seoul was livestreamed on YouTube for about 3.5 hours from 1:00 pm (0400 GMT). It was also televised live in South Korea, China and Japan.

Lee will play his second match against AlphaGo on Thursday. The match will continue even after three wins by either side.

Programmers have upgraded their program following the defeat of reigning world chess champion Garry Kasparov in 1997 by IBM’s Deep Blue computer, which became a milestone in the advance of artificial intelligence over the human mind.

Both Lee and DeepMind have said the match would go down in the history of Go and AI.

At stake is not just the prize money but scientific and technological progress.

Computers previously have surpassed humans for other games, including chess, checkers, and backgammon. But Go has been seen as the most complex board game with an infinitely greater number of potential moves.

Machines still have a long way to go before exhibiting real human intelligence, but scientists say the match, regardless of the result, will become a landmark in the history of AI. If AlphaGo wins, it would represent the most human-like machine yet created.

AlphaGo has a self-learning ability, and DeepMind hopes the match will provide a good chance to test AI's creative thinking. The technology used for the computer program can be applied to important real-world problems from climate modeling to complex disease analysis and robotics.

AlphaGo uses two sets of deep neural networks containing millions of connections similar to neurons in the brain, and Google claims Go could have more potential moves than there are atoms in the universe.

So a strong showing by AlphaGo would be a landmark in the field of AI as mastering a game of Go requires both human-like intuitions.