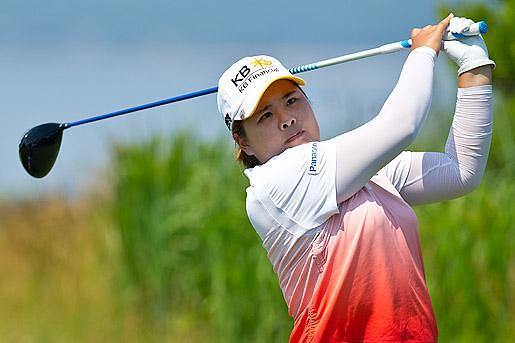 
With 17 titles that include seven major championships, world No. 2 Park In-bee has joined the LPGA Hall of Fame.

Park was inducted into the hall after completing her first round at the season's second major, the KPMG Women's PGA Championship, at Sahalee Country Club in Sammamish, Washington, on Thursday (local time).

Park is the second South Korean in the hall after Pak Se-ri, whose trailblazing ways in the late 1990s inspired the likes of Park, 27, to pick up golf.

An LPGA golfer must earn 27 points to qualify for the Hall of Fame, based on victories and statistical titles or season-ending awards. Park reached 27 points in last season's finale, the CME Group Tour Championship in November, by clinching the Vare Trophy for the scoring title.

The last hurdle was to complete the equivalent of 10 seasons, and Park did so by getting the first round under her belt at the KPMGA Women's PGA Championship.

As the three-time defending champion of the event, Park is trying become the first woman to win a major in four straight years.

Park joined the LPGA Tour in 2007 and won her first major, the U.S. Women's Open, in June 2008, making her the youngest champion of the oldest women's major at 19.

After that breakout victory, Park went through an extended dry spell. She didn't win again until July 2012, and then the floodgates opened.

Park ended up winning twice in 2012 en route to capturing her first money title, and reeled off six victories in 2013, three in 2014 and five more in 2015. In 2013, Park became only the second LPGA golfer to win the first three majors of a season. She went on to win her second straight money title and her first Player of the Year honors.