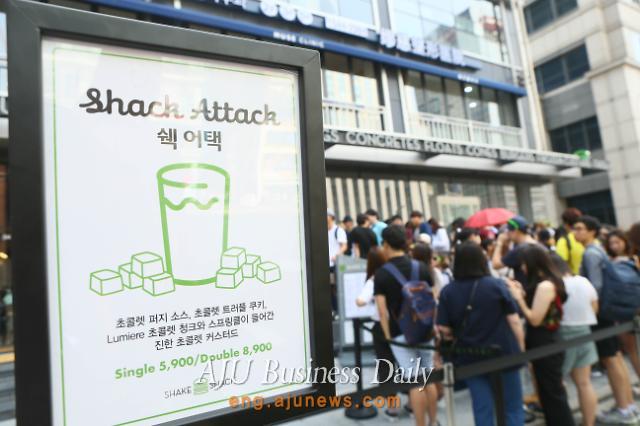 
Shake Shack scored an unexpected big hit Friday when the US burger-and-fries chain opened its first outlet in South Korea with some 1,500 quests forming a long queue overnight .

An online picture posted at 2:21 pm (0521 GMT) showed hundreds of people braving a sizzling summer heat to wait outside the building that housed the first-floor Shake Shack outlet, some wearing parasols. The queue has stretched about 150 meters (164 yards).

SPC Group, a leading food and confectionary producer, which runs the outlet under an exclusive license deal, said some 1,500 people had stayed overnight outside the restaurant in one of Seoul's most crowded and trendy streets in Gangnam which has gained a global fame due to rapper Psy's "Gangnam Style" music video.

The outlet opened after a ceremony chaired by SPC officials and US ambassador Mark Lippert. 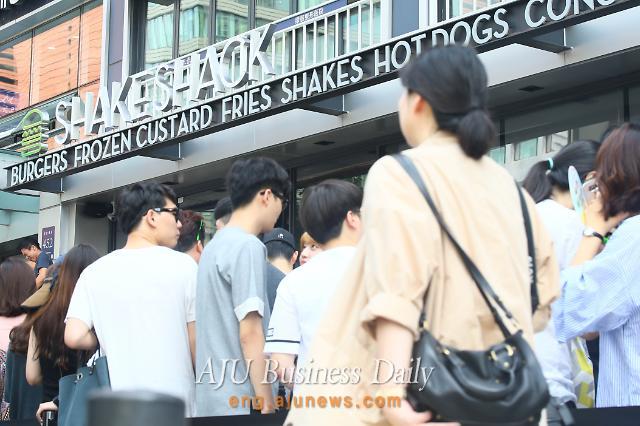 
"It's terrible. I gave up because it's so hot out there," an online community user named "Kimgaenggaeng" wrote, complaining about the long queue surrounding the restaurant.  Another user said he was allowed to get a seat inside after waiting for 210 minutes.


SPC said the queue was getting longer again as the evening rush hour draws near. "We're surprised at the response which is more enthusiastic than anticipated," said an SPC group official.

Shake Shack, owned by restaurateur Danny Meyer, is known for its use of antibiotic- and hormone-free meat and an eco-friendly business design that promotes composting food waste, reusing cooking oil and utilizing recyclable packaging. It started as a food cart in Manhattan's Madison Square Park in 2001 and eventually grew into a full-service kiosk in 2004.

South Korea's competitive fast casual food and hamburger market is split by foreign and domestic brands such as Burger King, McDonald, KFC, and Lotteria. But SPC was confident that Shake Shack would become a popular brand in South Korea.

SPC officials said the menu would  be supervised closely by the chain's US headquarters to maintain its original quality, taste and diversity. The standard burger was priced at 6,900 won (6.1 US dollars).