Chicken and beer festival kicks off in Daegu: Yonhap 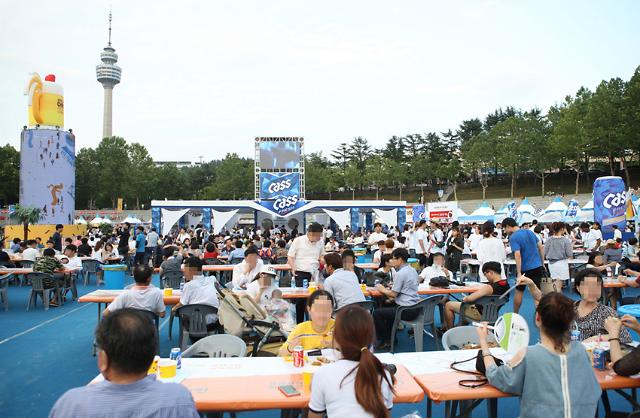 Fans of fried chicken and beer will gather in this sizzling hot city of Daegu this week as it holds a festival wholly dedicated to the hugely popular summer night snack in South Korea with various concerts and events.

The combination of chicken and beer is called "chimac" in Korean, and it's the theme of the "Daegu Chimac Festival," which runs from Wednesday to Sunday.

The Korea Chimac Industry Association Corp. hosts the event in the city, located some 300 kilometers southeast of Seoul, for the fourth year.

Having numerous poultry farms in the surrounding region, Daegu is abundant in fresh chicken and is the origin of several franchise brands that have made successful inroads abroad.

Over 200 booths will present 36 chicken franchise brands, 14 beer brands, side dishes and products by local artisans.

This year's festival will take beer fans' experience with chicken to a whole new level as a wide selection of craft beer is available under eased regulations on the sale of beer at public events. In past events, only canned beer was allowed.

The organizer expects that over 1 million people will gather from around the country and overseas this year, up from about 800,000 visitors last year.

"We have prepared more chicken and beer, along with entertainment, and expanded transportation options and amenities for the convenience of visitors," said Park Jun, the organizing committee's chairman.

Embassies of the United States and the Philippines will open booths to feature their own recipes of chicken and beer, and a trade fair will be held on the sidelines of the event to connect local franchise brands with foreign buyers, the organizer said.

The main venue is Duryu Park in west Daegu and its surrounding area. Pyeongwha Market, which has "Chicken Gizzard Road," and the downtown area will also feature various events throughout the weekend.

Sports fans can watch Korean baseball games on an outdoor screen set up in the park during the weekend, and a giant water slide is available for those who want to cool down.

K-pop concerts, electronic music and other busking sessions are scheduled every day and will be livestreamed on the Facebook page of the event, officials said.