Sulli, a former member of girl group f(x), cast a killing glance, wearing only a pink slip and rolling on the quilt in a bedroom in a new set of provocative Instagram images uploaded on Tuesday, answering back to angry haters who have launched an intemperate online attack.

Her Instagram page has been a free-for-all battleground which escalated in recent weeks because she kept uploading images disliked by haters. 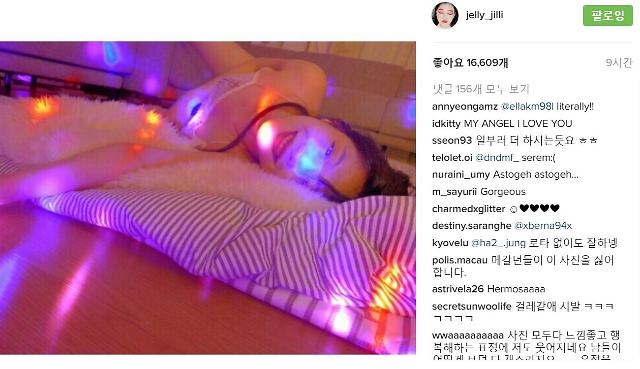 As usual, her new images released on Tuesday earned about 40,000 "likes" and 2,271 comments in nine hours. A large number of foreign fans joined the battle, mostly to protect Sulli. But many comments were critical, including a user "woomrs" who said, "You should be more careful if you are a public figure."

Some fans stood out for Sulli. "You guys cheer for Hollywood actresses' nude photographs and you call this image vulgar? I think you people should be ashamed." wrote "endurance.e". A foreign fan "tessawiththebutt" said, "Her photos are charasmatic and sexy. And she's also a grown woman so she can do whatever she wants."


She has been the target of constant online hate comments for her actions out of the ordinary and Instagram images which were reminiscent of a cute and sexy teenage girl.

Sulli was hospitalized in November with a wrist injury, sparking rumors that the wound was the result of an attempted suicide, although she insisted her injury was a mistake.

Sulli's reaction is quite rare as a celebrity in South Korea's entertainment circle. In most controversial cases, many celebrities show submissive attitudes, sometimes apologizing for nothing. On the contrary, she came out with aggressive or provocative comments, never kowtowing to an endless attack by cyber-bullies.