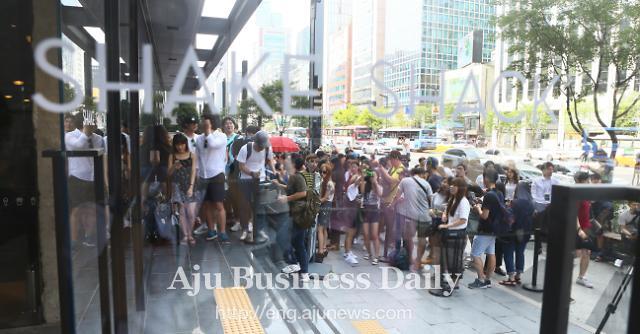 
Boosted by its dramatic success in less than a year, US burger-and-fries chain Shake Shack will open its fourth outlet this year in South Korea's saturated fast food market.

SPC Group, a leading food and confectionary producer which has an exclusive license deal with the US chain, said it would open the fourth Shake Shack outlet in Seoul's southern satellite town of Bundang following the opening of the third one on April 6 near the center of Seoul.

The first restaurant, which opened in Seoul's trendy streets in Gangnam in July 2016, reported an outstanding performance, selling more than 3,000 burgers a day. SPC described it as the most successful of all Shake Shack outlets in the world.

Shake Shack, owned by restaurateur Danny Meyer, is known for its use of antibiotic- and hormone-free meat and an eco-friendly business design that promotes composting food waste, reusing cooking oil and utilizing recyclable packaging. It started as a food cart in Manhattan's Madison Square Park in 2001 and eventually grew into a full-service kiosk in 2004.

SPC treats local fans to the original taste and quality of Shake Shack's crispy fried chicken sandwiches and all-natural beef burgers. The menu has been supervised closely by the chain's US headquarters to maintain its original quality, taste and diversity.

South Korea's competitive fast casual food and hamburger market is split by foreign and domestic brands such as Burger King, McDonald, KFC, and Lotteria. But Shake Shack has become one of the most popular brands.