South Korea's state-run research institute is set to ship its share for an "artificial sun" under construction in France under a seven-nation mega project called "International Thermonuclear Experimental Reactor (ITER)" aimed at developing technologies for a fusion power station.

The National Fusion Research Institute (NFRI) said it would ship vital assembly machines Sunday for the ITER program to build a nuclear fusion reactor, which is similar to the sun, near the Cadarache facility in Saint-Paul-lès-Durance in southern France.

Seven countries including South Korea, the United States, China and EU members have been involved in the project from 2007.

NFRI and Taekyung Heavy Industries Co., a private company, are responsible for building two gargantuan machines required in the creation of "Tokamak", a device which uses a magnetic field to confine the plasma in a shape of a ring. Tokamak is a vital part in producing controlled thermonuclear fusion power. Once delivered, the machines will be set up in the ITER assembly zone for safety tests. 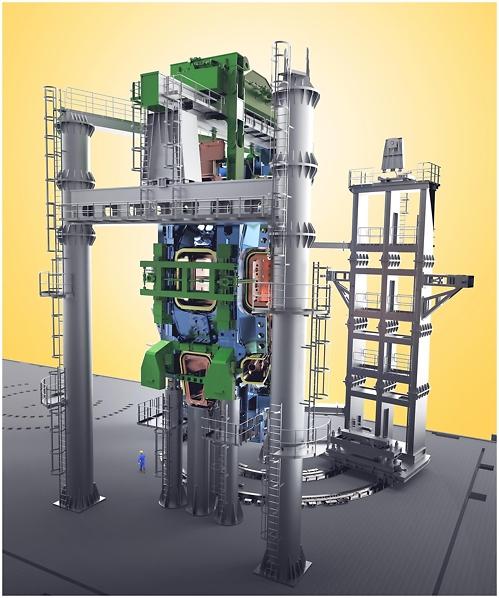 
The ITER facility is expected to finish its construction phase in 2021. Plasma experiments will begin in 2025 and full deuterium-tritium fusion experiments in 2035. Once the fusion reactor is operational, it will become the world's largest magnetic confinement plasma physics experiment.

Fusion power, generated by nuclear fusion, has long been spotlighted as a safe next-generation power source capable of reducing radioactivity. However, commercialization has a long way to go because it's extremely difficult to produce the state of controlled fusion.