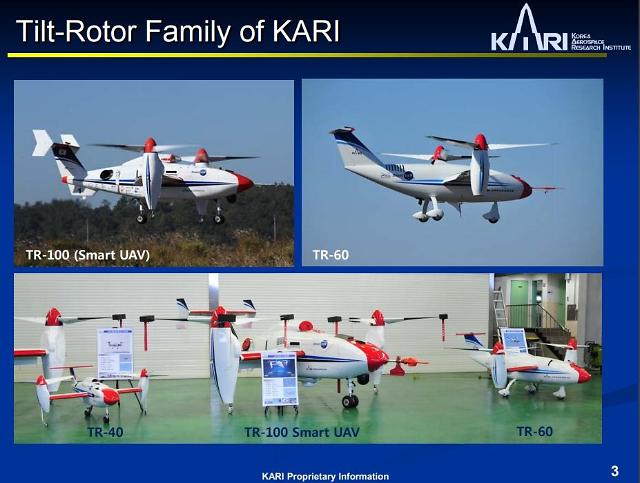 
An unmanned aerial vehicle powered by helicopter-like rotors has successfully conducted a vertical take-off and landing test aboard a fast-moving coastguard vessel, paving the way for its commercial and military use.

The state-run Korea Aerospace Research Institute (KARI) said the test involving its TR-60 UAV was done last Friday aboard a ship which was sailing at a speed of 10 knots. The model with rotors at its wingtips is an upgraded version of KARI's TR-100 developed in 2012. The Institute and Korean Air have launched a joint project to develop advanced technologies for tilt-rotor UAVs.

The TR-60  weighs 200 kilograms and is capable of flying for more than five hours at a maximum altitude of four kilometers. Tilt-rotor UAVs could be used for various military and civil purposes such as fishing, surveillance and reconnaissance in the sea.

The defense ministry has already disclosed plans to develop indigenously-produced UAVs capable of detecting North Korean provocations at an early stage. In May, North Korea accused South Korea of sending an Israeli-built Heron surveillance drone that intruded deep into its airspace across the Yellow Sea border.

South Korea regards UAVs as the most versatile solution for sophisticated intelligence, surveillance and reconnaissance missions as they can execute covert operations in sea and land border areas without risking human casualties.

The two Koreas have been locked a war of drones along their border. In recent years, South Korea has recovered North Korean drones which crashed south of the border.

North Korean drones are nowhere near as sophisticated as those used by the United States, deployed mainly for short-range missions to take pictures, but concerns are growing that they could be weaponized for future attacks.
according to an earlier article carried by 38 North, the website of a US research institute.