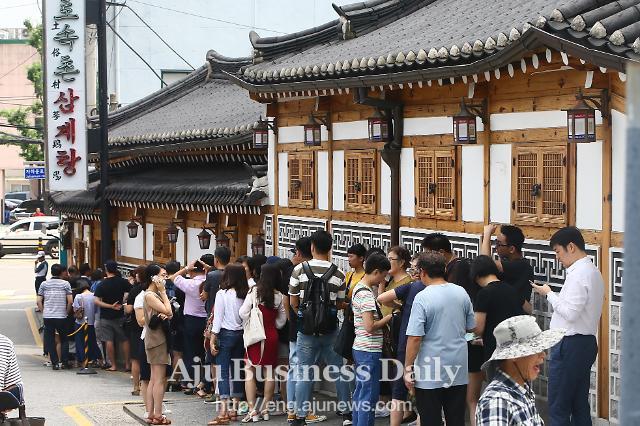 Consumers wait for their turn outside a Samgyetang restaurant in Seoul.[Photo by Yoo Dae-gil = dbeorlf123@ajunews.com]


A strict ban on the distribution of live chickens was eased to help South Koreans enjoy Samgyetang (traditional ginseng chicken soup), one of their favorite summer foods, at reasonable prices.

Samgyetang, which uses a young chicken filled with garlic, rice, scallion and spices, ginseng and jujube, has been consumed widely as a healthy food on hot summer days along with Boshintang (dog soup).

The population of eating dog meat has dropped dramatically thanks to an active campaign by animal lovers, and Samgyetang prices have also soared due to an outbreak of highly pathogenic avian flu that followed the culling of millions of layer chickens this winter.

In an effort to control prices, the agriculture ministry decided Tuesday to ease a nationwide ban on the distribution of live chickens at open markets in areas where bird flu cases have not been reported since June 19 while open-air restaurants would be allowed to use live chickens for cooking.

The move is apparently aimed at promoting the consumption of chickens at the request of traders, consumers and restaurant owners. Samgyetang is also popular among Japnese and Chinese tourists.