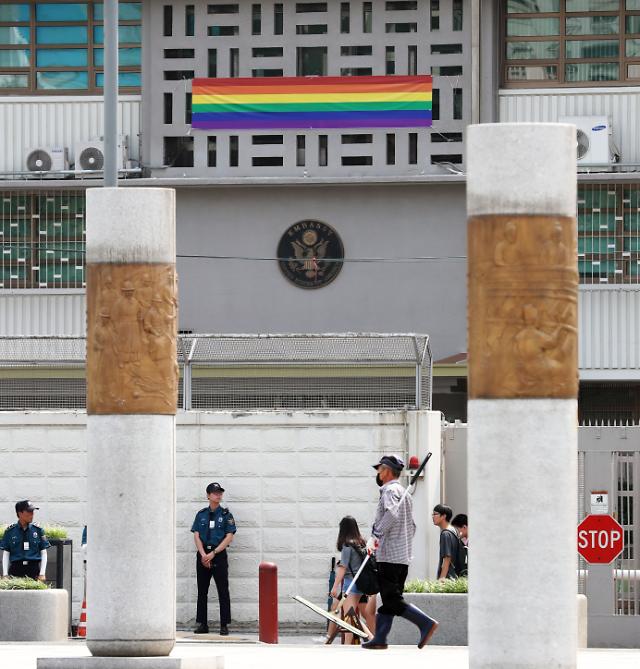 
Pedestrians turned their curious eyes to a large rainbow flag that symbolizes gay pride and decorates the front wall of the heavily guarded US embassy building in central Seoul on the eve of an annual Queer festival.

The flag put above the main entrance of the embassy building tightly guarded by South Korean riot police was part of a campaign to support the rights of lesbian, gay, bisexual and transgender (LGBT) people. There was no official comment, but the embassy hoisted the flag for the first time this year.

"We don't know when it was put there, but I saw it for the first time today," a police guard outside the embassy told Aju News. The flag originally devised by San Francisco artist Gilbert Baker has been a symbol of LGBT pride and LGBT social movements.

Since same-sex marriage was legalized in the United States two years ago, its embassy in South Korea has openly supported the two-day Queer Festival to be held this week. On Saturday, thousands of LGBT people would stage a gay pride parade after rallying on a public plaza outside the Seoul city hall, calling for the better social care of South Korea's sexual minority community.

Conservative Christians have opposed the festival insisting it would create a sense of aversion with "obscene" activities and spread wrong ideas about sex.

The Queer parade has attracted more participants since it began in 2000. This year's festival comes on the heels of a fresh controversy over alleged discrimination at military camps on the basis of sexual orientation or gender identity.

In May, an army captain was given a suspended jail sentence for having sex with a male soldier. Amnesty International called it an "outrageous military gay witch-hunt" and argued the officer was punished under the military law that prohibits military personnel from engaging in "same-sex consensual sexual activity".