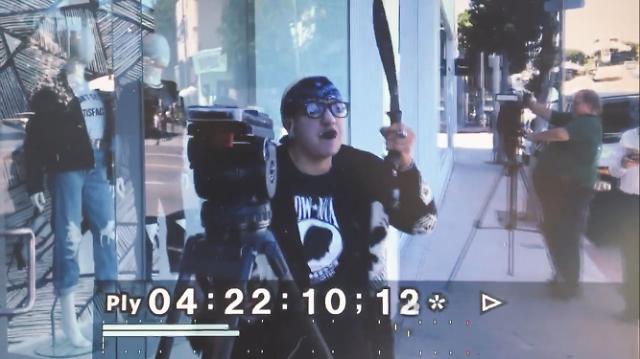 
It was a sunny morning on Thursday when a woman entered a clothing boutique store Dash in West Hollywood founded by Kardashian sisters. She pulled a handgun out and pointed at an employee and yelled, "Stay away from Cuba!"

She knocked displayed items from the counter and pointed her firearm at another employee, mumbling disorderly. She walked out of the store before noon according to the Los Angeles County Sheriff's Department. The staff alerted the local authorities.

Police started to comb through the nearby area with a police helicopter to locate the woman to no avail. The woman was described to be 5'10" and about 170 pounds with blond hair and wore a bandana.

The local TV station crews and tabloid photographers rushed out to report the news and shoot a footage/ Around 1:45 pm the woman came back with a 14-inch machete.

She started shouting, "The Kardashians will be executed if they step on communist territory. They will be f----g killed. Don't mess with the Castro family." An onlooker yelled at her to shut up but the woman shouted back threateningly.

She turned around and directed her anger toward the TV crews and photographers and threatened to stab one of them. After shoving the machete into the door of Dash, she walked away from the scene again. Deputies began searching the area again to find the woman.

The woman now identified as a 35-year-old woman, Maricia Madrano was later arrested at her residence. She was and arrested around 9 pm.