South Korea's state-run research institute claimed to have made a technological breakthrough in enhancing the efficiency of generators that use carbon dioxide to produce electricity instead of steam for the first time in the world.

The Korea Institute of Energy Research (KIER) said it has developed a highly efficient turbine axial type generator using carbon dioxide. It did not say when commercialization is possible.

Although research has been conducted on carbon dioxide generators in many countries, only small-sized radial generators have been developed. Large axial generators could produce more power but they could easily break down due to the friction caused by turbines being turned at extreme speeds. 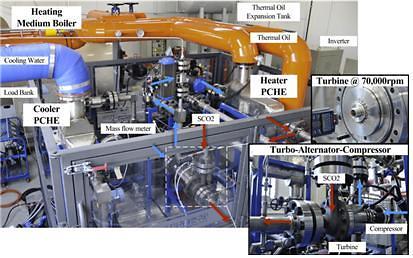 
"If generators at conventional steam power plants are replaced with carbon dioxide generators, we will be able to enhance fuel efficiency greatly," the institute said in a statement on Monday. "The effect will be equivalent to building five 1,000MWe class nuclear power plants."

Unlike conventional steam generators, the new generator uses super-heated and highly pressurized carbon dioxide to spin turbines. It takes advantage of carbon dioxide's supercritical state which holds the characteristics of liquid and gas. Efficiency would be increased by up to five percent. 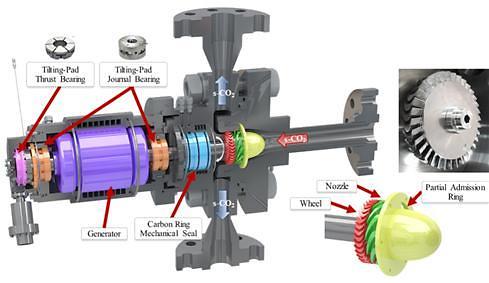 
​After about three years of development and field testing, KIER said it has developed a special sealing and management system which prevents mechanical failures induced by frictions and energy loss, securing core technology.

The new generator is eco-friendly because of efficiency and will contribute much to decreasing particulate matters and greenhouse gas by reducing the use of fossil fuels.