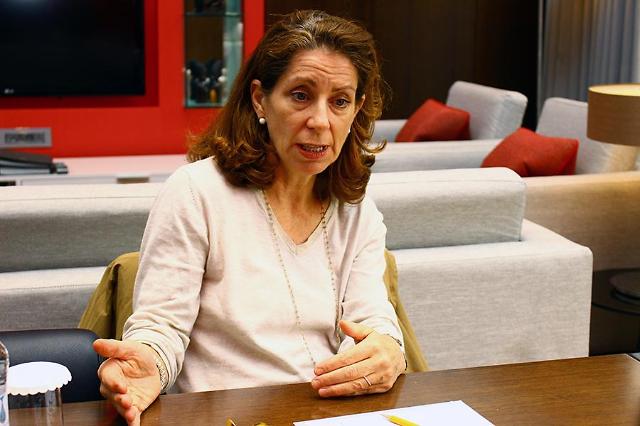 
The World Bank regards climate change as a very important development issue as many developing and poor countries are vulnerable to disasters, requiring more sustainable and greener growth than advanced countries.

"Climate change is a very important development issue. We are interested because poor people and poor countries are going to be one that suffers most," Marianne Fay, a chief economist of the World Bank's sustainable development vice-presidency, said in an interview in Seoul.

Developing countries are very critical part of the solution because the majority of emissions come from them, but there is a challenge as they absolutely need continued demographic growth, she said. "And the big question then is how can we develop growth patterns that are cleaner and more resilient."

To stabilize the climate, Fay said the world should stop emitting carbon more than the system can absorb and get to "zero net emissions" by the end of the century. However, she was optimistic, saying costs for a transition to solar power and wind-generated electricity have dropped dramatically.

"My concern is more at how do we manage the transition and protect poor people in the meantime," she said, calling for systems to help poor people who are more exposed to climate disasters because they get less access to help.

"In very poor countries, we put in place social safety nets so that people don't completely fall into poverty trap where they have to take their children out of their school, or leave them malnourished, these kinds of impacts go over generations," she said, adding quick intervention is required to solve this problem.

Work has been done in four broad categories: decarbonizing electricity such as renewable and carbon-capturing storage; electrification and things like electric cars: efficiency to reduce waste and deforestation; improving natural carbon sinks.

Fay said many developing countries have great potentials for renewable energy, but there's a challenge over how to integrate this into a gird, how to make the electric grid stable. "Even though you have maybe a day without sun or a day without wind, we also are beginning to think about what electric vehicles, self-driving cars and these kinds of things will mean for transportation and urbanization of developing countries."

In developing countries which need all the infrastructure built, the World Bank works on "base clean energy" like solar power, wind, geothermal, hydro-electricity, she said.

There has been a dramatic fall in global poverty rates, but many people are still vulnerable to droughts and floods. "Our mandate is to reduce poverty and to promote and share prosperity and do that in a sustainable way," said Fay, who is a founding member of the Green Growth Knowledge Platform.

Quick action should be done in poor African countries, where five percent of the population has access to electricity, while the middle-income countries like Turkey and Brazil need sophisticated solutions.

Due to reduced costs, the clean energy has now become more competitive than coal or diesel, but the question is how to ensure the base level of energy in countries which lack hydro, Fay said, describing gas as a transition fuel that eventually will phase out.

Fay suggests South Korea, heavily dependent on imported fuels, is a unique role model because it can share its experiences and give advice.

Developing countries are very interested in how South Korea promotes sustainable development and green growth, she said, citing Hanam, one of Seoul's satellite cities, as a good example of eco-friendly urbanization with its waste disposal system built into an underground complex and its transport transit network.

Latin American countries have great potential for solar and wind energy, and they are more interested in energy policy, energy efficiency, storage and exchange, Fay said.

Through the Korean green growth trust fund, which has expanded to about 88 million dollars over five years, South Korea has an influence on ten billion dollars worth of lending. "It's a significant amount of money that the government of Korea can influence towards more sustainable development and green growth," the economist said.

"We have to think about how we design roads, ports, airports, and bridges so that they will last for the climate of the future. But the problem is that we don't know how that future is going to be," Fay said. "So we had to develop with many partners  and methodologies so that we can design a resilient transport system in a situation with a lot of uncertainties about future climate."