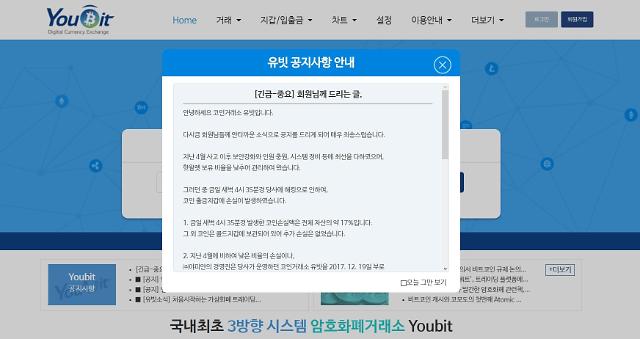 
SEOUL, Dec. 19 (Aju News) -- Bowing to a series of attacks by hackers, Youbit, one of South Korea's cryptocurrency exchanges, announce the shutdown of transactions, saying it would file for bankruptcy.

The exchange said in an urgent notice to clients that its service was suspended from 2:00 pm (0500 GMT) due to losses in coin withdrawal wallets following a second attack by hackers on Tuesday.

The exchange said it lost about 17 percent of total assets with the rest stored in a cold storage that keeps coins completely offline. Compared to the first attack in April, losses on Tuesday were found smaller, but the exchange decided to shut down deposit and withdrawal services.

"The settlement of cash and coins will be carried out in accordance with bankruptcy procedures," the company said, promising to lower the amount of damage to clients through its insurance estimated at three billion won (2.75 million US dollars) and the sale of its operating rights.

The cyber attack came amid growing concerns over cryptocurrency users being targeted by hackers and swindlers. South Korea will impose a ban on cryptocurrency transactions by teenagers and foreign residents along with tight regulations and punishment on illegal activities by digital money exchanges and speculative investors.

Last week, the Korea Communications Commission imposed a fine of 60 million won on the operator of Bithumb, the country's largest digital currency exchange, for negligence after hackers stole the private information of users.