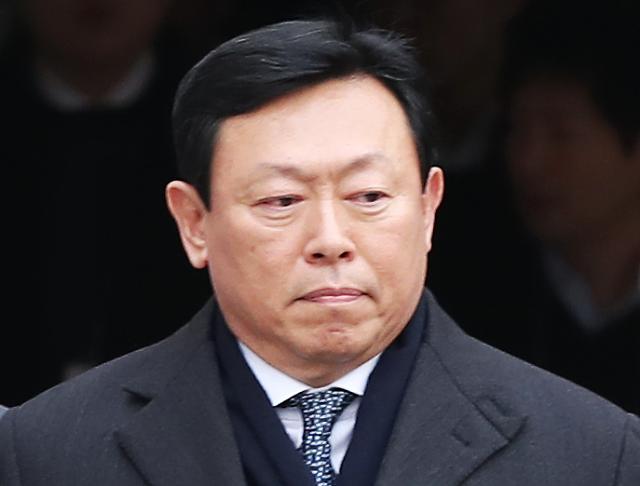 A criminal court in Seoul sentenced group chairman Shin Dong-bin, 62, to 20 months in prison on charges of embezzling company money, with a stay of execution for two years. His brother was found not guilty.

Group founder Shin Kyuk-ho, 95, received a four-year jail term and a fine of 3.5 billion won (3.2 million US dollars) on charges of embezzlement and breach of trust, but the wheelchair-bound patriarch was not detained because of his ailment and age.

In court, the two sons have claimed they were innocent, shifting the responsibility to their ailing father who was mentally incompetent. Shin Young-ja, the chairman's elder sister, received a two-year prison sentence. She was sentenced to three years in prison in January in a separate case.
The founder's common-law wife, Seo Mi- kyung, 57, received a suspended sentence. The 1977 winner of the group's Miss Lotte beauty pageant has a daughter with the founder, who was accused of evading gift taxes by handing over shares and assets to Seo and other family members. Lawyers have called for mercy, insisting the group chairman did his best to rescue, Lotte, which has been in trouble due to a diplomatic row between Seoul and Beijing over an American missile shield. Lotte has been the prime target of China's retaliatory onslaught that began after the group let US troops set up a missile shield in its golf course.

Friday's ruling was not a final case.  Group chairman Shin Dong-bin is on trial for his role in a corruption scandal involving Choi Soon-sil, the jailed crony of ex-president Park Geun-hye.  In a hearing on December 14, prosecutors demanded a four-year jail term for the chairman for bribing Choi. The verdict will come on January 26.

Choi, 61, has been indicted on charges of meddling in state affairs, siphoning off money from two public foundations created with cash donations from dozens of conglomerates.