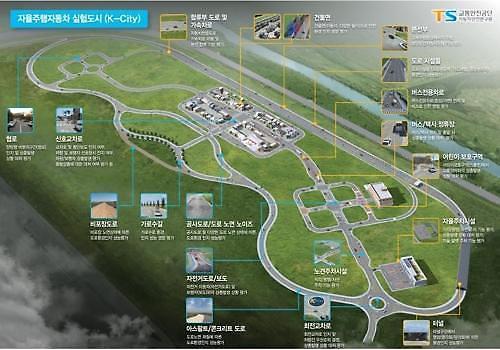 The bird's eye view image of K-City, a testbed for autonomous vehicles. [Courtesy of the Ministry of Land, Infrastructure and Transport]


SEOUL, Jan. 24 (Aju News) -- South Korea envisaged the establishment of a city-like testbed for autonomous cars by the end of next year and promised to turn urban highways and bus lanes into smart roads capable of providing road and traffic data.

In an effort to commercialize autonomous cars by 2020, the Ministry of Land, Infrastructure and Transport said Wednesday that 85 kilometers (52 miles) of roads including urban highways and bus lanes in Seoul into smart roads along with safety regulations and insurance policy for autonomous vehicles.

Other than well set-up roads and a city environment, "K-City" will also simulate urban road conditions such as potholes, bottlenecks, traffic lights and pedestrian crossings. The whole area will be covered by the fourth generation wireless network, which is vital for autonomous vehicles.

Other events planned by the ministry include test drive sessions in the eastern ski resort of Pyeongchang, which will hold next month's Winter Olympics. South Korea has eased regulations to speed up the development of autonomous vehicle technologies, allowing the test drive of self-driving cars.