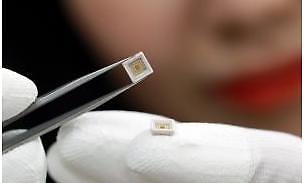 
SEOUL -- LG Innotek unveiled an aggressive business plan to become a top player in the global ultraviolet light-emitting diode (UV LED) market, based on its ability to produce advanced products that can emit ultraviolet light strong enough to sterilize air and water in broad places.

"UV LED is an innovative light source that can improve the quality of life by making our life cleaner and safer," Park told reporters, suggesting LG Innotek would provide a total solution including modules and platforms to business partners.

He said his company has been in contact with a number of companies interested in sterilization, hardening devices and hygiene. UV LED can be used in a wide array of household appliances from water and air purifiers to air conditioning systems for buildings and automobiles as well as water treatment devices.