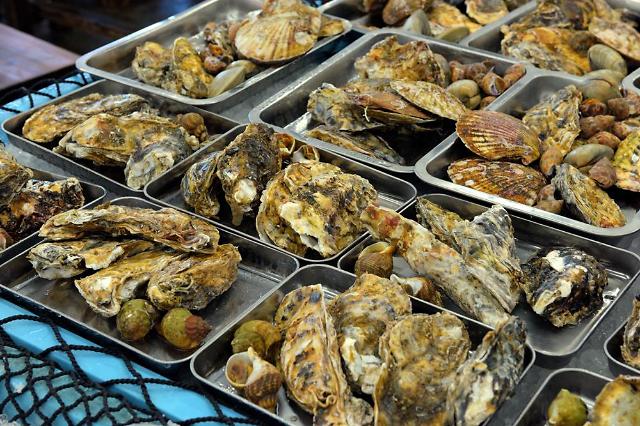 SEOUL --  Because of the irregular spread of paralytic toxins in seawater, health authorities imposed a ban on harvesting shellfish in many coastal towns along the southeast coast known for South Korea's most famous sea farming.

The Ministry of Oceans and Fisheries said in a statement Wednesday that the harvesting of shellfish was banned at 28 coastal areas where levels of shellfish toxins exceeded the standard of 0.8 milligrams per kilogram.

The ban on shellfish including clams, mussels and oysters came earlier than usual, dealing a blow to South Korea's sea farming industry.

"Normally, high levels of paralytic toxins are witnessed from April to June. But this year, toxins were found a bit earlier," Ha Kwang-soo, a researcher at the National Fisheries Research and Development Institute, told Aju News.

The researcher said the irregular phenomenon may have been caused by heavy rainfalls in coastal areas in early March that triggered the rapid growth of toxic planktons. "It's hard to say when the toxins will disappear. I think they may go away in early June," he said.

Shellfish contaminated with toxic algae or planktons can cause paralytic shellfish poisoning (PSP). Paralytic toxins were detected first in waters near the southern port city of Busan and Geoje Island in early March, spreading to adjacent areas.