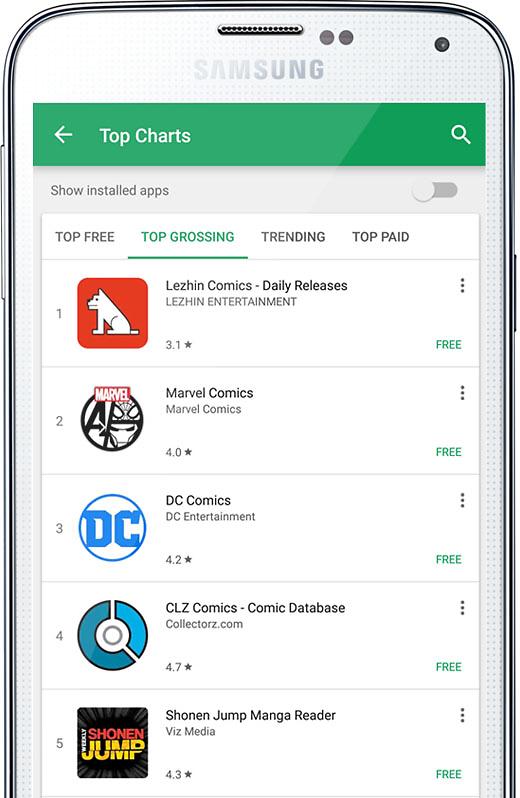 SEOUL -- Lezhin Comics, a Seoul-based web cartoon portal, promised to step up its overseas business Monday after it outsold strong U.S. rivals such as Marvel and DC Comics to become the best seller among American readers in the first quarter of this year.

Lezhin launched its services in Japan in 2015 and the United States a year later. Combined sales rose 29 percent on-year to 51.3 billion won (48.4 million US dollars) last year, but it posted an operating loss of 12.5 billion won due to rising marketing costs.

In the first quarter of this year, Lezhin topped the list of best grossing applications on the U.S. Google Play market, reaping bigger sales than Marvel and DC Comics, which have created superhero comics such as Batman, Superman and X-Men. The American companies are doing well at offline stores.

In most cases, smartphone comics platforms are free to attract users. Lezhin allowed free access to all contents weeks after they were released. Paid subscriptions are applied to the latest issues.

This is the first time for a South Korean web cartoon platform to become the highest-grossing app in the Comics Category of Google Play. Lezhin said paid subscriptions in the U.S. market stood at 6.6 billion won in 2017, compared to 800 million won a year ago.

"We are glad to take the first place in the highest-grossing app in Google Play's Comics category," Lezhin CEO Han Hee-sung said in a statement, vowing to strengthen the influence of South Korean web cartoons abroad by creating good contents. Lezhin provides about 160 translated comics.