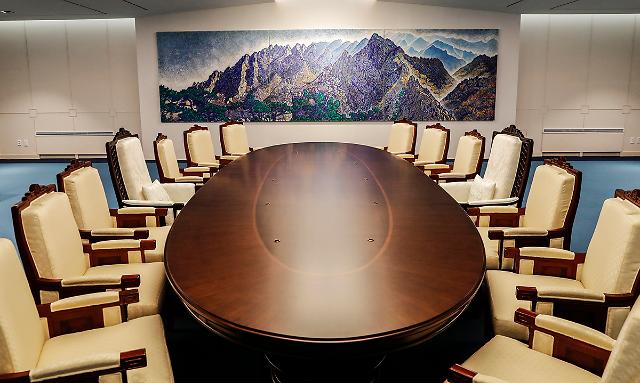 [Courtesy of the presidential Blue House]


SEOUL -- A new oval-shaped table has replaced a square one to reduce a psychological sense of distance and share a frank conversation at the conference room for this week's historic inter-Korean summit, the South's presidential office said Wednesday.

The summit between South Korean President Moon Jae-in and North Korean leader Kim Jong-un will take place on Friday at the Peace House, a South Korean facility on the southern side of Panmunjom, a truce village in the middle of the demilitarized zone which bisects the Korean peninsula.

The 30-year-old Peace House, which sits about 130 meters south of the imaginary border line in Panmunjom,  was rebuilt in 1989. It was refurbished for the summit, bringing in new furniture and paintings.

A square table in the second-floor conference room was replaced with an oval-shaped one. Moon and Kim will sit 2,018 millimeters across in center, highlighting the 2018 summit. Seven chairs were placed on each side with Kim and Moon using yellow-colored chairs inscribed with the unified Korean peninsula. The floor was covered with a blue carpet.

The presidential office said Moon and Kim would walk into the conference room simultaneously. The third floor placed with walnut tree tables will be used for a state dinner

New artworks adorned the walls, and a large 22 feet by 6 feet drawing of the North's Mount Kumgang on the east coast was put on the side wall. In front of the painting, the two leaders will shake hands and take a memorial picture.