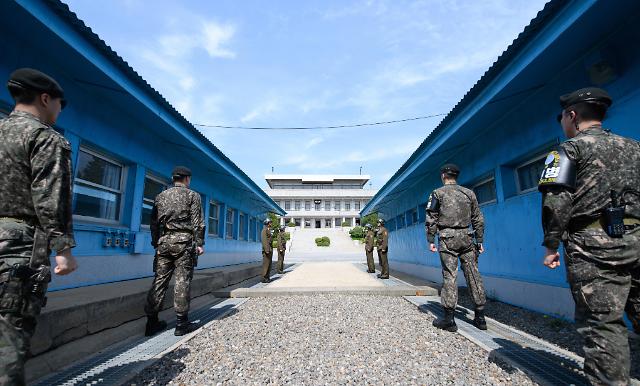 South Korean President Moon Jae-in will guide Kim from the borderline to the venue of their summit on the southern side of Panmunjom, a joint security area controlled by American troops in the middle of the demilitarized zone which splits the Korean peninsula.

Outside the venue, Moon and Kim will jointly inspect a South Korean military honor guard in a welcoming ceremony before holding talks that would begin at 10:30 am (0130 GMT) on the second floor of the refurbished Peace House, according to the presidential Blue House.

They will dine separately for lunch, followed by an event to plant a pine tree symbolizing peace and prosperity in a place in the joint security area. After an afternoon session, the two leaders will attend a state dinner.

"I think it would be very successful if we could lay down a firm willingness to denuclearize and confirm clearly that this means complete denuclearization on the Korean peninsula," Moon's chief secretary, Im Jong-seok, told reporters. He admitted that denuclearization would not be achieved only through inter-Korean talks, referring to U.S. demands for Pyongyang's complete and irreversible steps.

The appearance of Kim's wife, Ri Sol-ju, is not certain, but South Korean officials hope she will attend a dinner.

Kim will be accompanied by a nine-member entourage which includes North Korea's 90-year-old ceremonial head of state Kim Yong-nam and Kim Yo-jong, the leader's sister who visited South Korea as a special envoy to attend the opening ceremony of the Winter Olympics in February.

The North's entourage will also include Kim Yong-chol, a vice chairman of the ruling Workers' Party of Korea's central committee in charge of inter-Korean affairs; Ri Myong-su, the chief of the General Staff; Pak Yong-sik, the minister of North Korea's armed forces; Foreign Minister Ri Yong-ho.