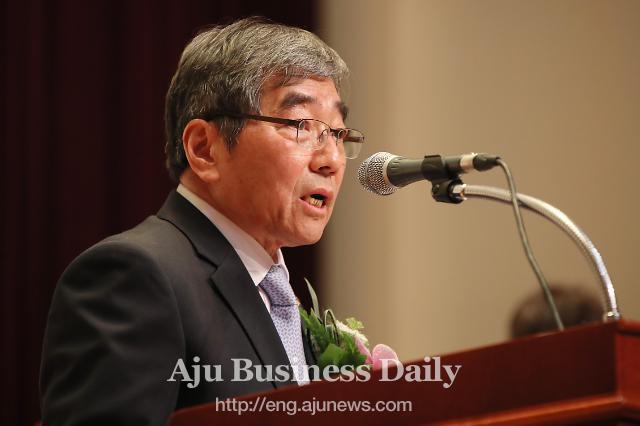 
SEOUL -- The end goal of the state's financial supervision is to develop a viable commercial sector by improving regulatory efficiency, the new head of the Financial Supervisory Service (FSS) said Friday.

The remarks by newly appointed FSS Gov. Yoon Suk-heun could help ease market anxiety that he may step up pressure against local financial firms to ensure consumer protection.

The FSS "will be devoted to its role of financial supervision," Yoon told a meeting with civilian advisers for financial reform.

The financial sector could make the next leap forward if the FSS fulfills its role and function, Yoon said.

Financial authorities have pushed to strengthen its weak financial industry by easing barriers for new players.

The FSS will moreover seek better communication with the market, while boasting its efforts to protect financial consumers, Yoon said.

Yoon, who was appointed to the post earlier this month, had served as a visiting professor of business administration at Seoul National University and the head of a government commission that maps out measures to reform financial administration affairs.

As the chairman of the Financial Administration Innovation Committee, the reform-minded professor recommended that financial authorities should impose a fine on Samsung Group Chairman Lee Kun-hee for allegedly evading taxes with borrowed-name accounts.

The proposal cleared one of key questions about Samsung BioLogics' sudden profit in 2015.

Founded in 2011 as a new growth engine of Samsung Group, Samsung BioLogics posted losses until 2014.

In 2015, however, the company posted a net profit of 1.9 trillion won (US$1.76 billion) after it changed the method used to calculate the value of Samsung Bioepis.

Samsung BioLogics has claimed that the change was in line with international accounting standards.

Asked about the regulatory filing by Samsung BioLogics, Yoon replied that the FSS will "cope with the matter."

Yoon declined to give details on the basis that more review sessions are scheduled for later this month.