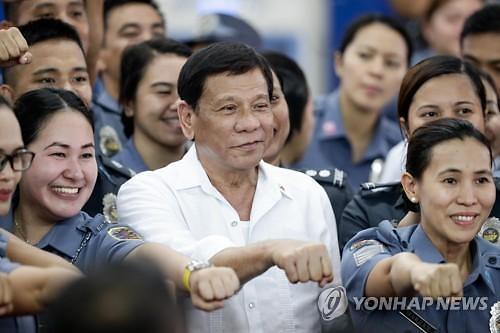 
SEOUL -- Philippine President Rodrigo Duterte will make a three-day state visit to South Korea next month for a summit with South Korean leader Moon Jae-in. Duterte will be the first head of state from the Association of Southeast Asian Nations (ASEAN) to visit South Korea since Moon took office in May last year.

The summit between Moon and Duterte will be held on June 4, the president's office said Friday. The two leaders last met in the Philippines in November last year on the sidelines of the ASEAN+3 Summit and East Asian Summit (EAS).

In line with Moon's policy of expanding ties with Southeast Asian nations, the Philippines foresees that bilateral relations will continue to expand in the areas of defense, trade, investments, agriculture, science and technology and socio-cultural exchanges, Philippine Ambassador Raul S. Hernandez said in an earlier interview with Aju Business Daily.

Hernandez said his country with a rapidly-prospering market of 100 million people, a very large productive labor pool and abundant resources could offer "complementary manufacturing options", he said as many South Korean firms based in China seek the relocation of factories to Southeast Asian countries.